The US signed two trade deals with Japan at the beginning of this week but neither addressed the contentious issue of potential tariffs on vehicles and automotive parts traded between the two countries, a sticking point in the discussions leading up this week’s agreements.

The US signed two trade deals with Japan at the beginning of this week but neither addressed the contentious issue of potential tariffs on vehicles and automotive parts traded between the two countries, a sticking point in the discussions leading up this week’s agreements. 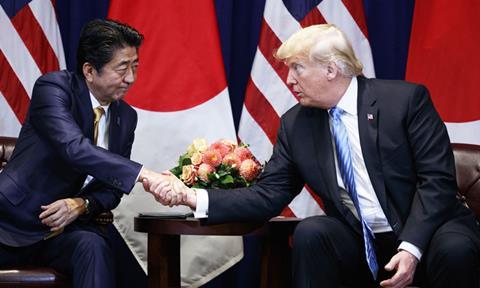 The deals signed on Monday, which cut tariffs on foodstuffs and digital products, cover roughly $55 billion in trade. They are seen as restoring market share since Trump pulled the US out of the Trans-Pacific Partnership (TPP) in 2017.

Japan exports $40 billion worth of vehicles to the US paying a 2.5% import tax on each passenger car (and on parts) and was looking to remove this as part of the new trade agreement with the US. However, in May this year Donald Trump said that the tariff could rise to 25%, as part of its Section 232 national security policy, holding off on a final decision for six months. In August he said that the US would not “immediately” impose the higher tariffs, but neither would he confirm whether the decision was permanent.

Automotive trade represents the biggest source of the $67.6 billion US trade deficit with Japan.

While Trump remains inscrutable, Japanese prime minister Shinzo Abe said he had received reassurance that the US would not impose the Section 232 tariffs. Quoted by Reuters news agency Abe said: “Between President Trump and I, myself, this has been firmly confirmed that no further, additional tariffs will imposed. And with the entry into force of our trade agreements, I believe both of our economies will be able to further grow and develop.”

Japan was the third largest exporter of vehicles and parts to the US in 2018 (after Mexico and Canada) and, taking finished vehicles alone, was the leading exporter, accounting for 23% of total US passenger vehicle and light truck imports, equal to 1.7m units, according to data from the US Department of Commerce.

By contrast the US exported just 15,850 new passenger vehicles and light trucks to Japan in 2018, paying a 2.5% tax on those exports. Half year figures for this year show an increase in exports on last year, with around 12,700 US vehicles exported to Japan between January and June, up more than 3,000 on the same period last year. In the same six months Japan exported more than 880,000 vehicles to the US.

At the signing on Monday Trump said that negotiations would continue on “remaining areas of interest to achieve a final and very comprehensive agreement”. Carmakers in Japan and the US are waiting to see what this will mean for their sector.