Bosch’s roadmap to a zero-carbon operation 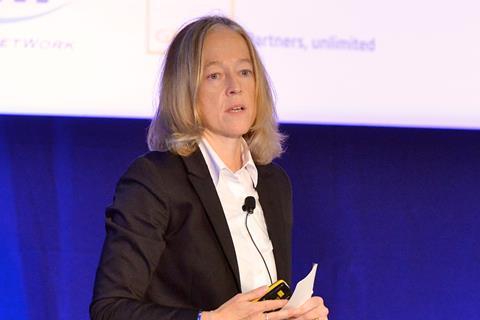 Much of the focus on sustainability in the automotive industry has been on the gases produced by vehicles themselves, but as Daniel Harrison, analyst at Ultima Media, noted at last week’s Automotive Logistics Central and Eastern European Summit, 18% of emissions are attributable to the supply chain. Several speakers at the conference emphasised the need to scrutinise the whole chain from end to end to find ways to improve sustainability, and one of these was tier supplier Robert Bosch.

As explained by Christine Mezger-Behan, vice-president of transport management worldwide, Bosch has completed a number of sustainability projects worldwide, including installing wind power in Mexico and solar power in India, but at its European plants at Stuttgart-Feuerbach and Renningen, Germany the emphasis has been on improving energy efficiency.

This is generally easier at newer facilities such as Renningen, where the use of a planted roof and rainwater cistern to keep the building cool has resulted in 30% energy savings. Yet even old facilities, such as Stuttgart-Feuerbach, can be improved with new sustainability concepts (albeit more expensively). Management and training programmes there have led to a 55% reduction in energy consumption since 2007, Mezger-Behan said.

“Basically, you can do an awful lot in optimising your land transportation but if you continue to fly products around then unfortunately what you’ve done with an ongoing effort is then spent within a day or two” – Christine Mezger-Behan, Bosch

Besides reviewing and enhancing energy use at its facilities, Bosch has also taken steps to make its supply chain more sustainable, including transport and packaging. For example, the company decided to use cargo rather than passenger aircraft for its air freight, resulting in 1.7 times lower energy consumption. For shipments by truck, it uses volume-optimised, stackable packaging. The company has also reduced delivery frequencies, consolidated parts and optimised truck sizes to benefit from three times lower CO2. 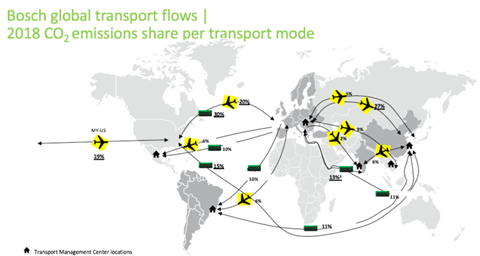 Bosch is now working on a plan which includes looking at supply chain network design, streamlining its warehouse footprint and optimising its transport network.

By locating facilities close to customers and suppliers, increasing local sourcing and questioning whether it was necessary to ship from one plant to another, the company can reduce its transport and warehousing needs. When it comes to warehousing, Bosch is trying to optimise the space and reduce its footprint, while optimising the transport network involves using full trucks and shipping products in an optimum mode and by the best route.

Visibility and sustainability
Bosch’s efforts have been supported by the greater visibility enabled by the transport management centres, where it centrally optimises and manages shipments. Mezger-Behan explained that this allows the company to see the main lanes where it “spends” CO2, whether by land, sea or air – something that was impossible to track three or four years ago. “We have a clear measurement, we know exactly how our products are transported [and] we know what equipment is used for this.”

This data revealed that in 2018 Bosch generated no less than 71% of its transport CO2 emissions by air freight, while 22% came from land transport and just 7% came from sea routes. The company has now established a policy of eliminating planned air freight, meaning that it will only use planes in emergency situations. This will be combined with a local procurement and production strategy.

“Basically, you can do an awful lot in optimising your land transportation but if you continue to fly products around then unfortunately what you’ve done with an ongoing effort is then spent within a day or two,” said Mezger-Behan. She admitted that using ships rather than planes, for example, could require building up more inventory, but said that Bosch would invest where necessary.

An analysis of Bosch’s transport CO2 emissions in 2018 showed that most came from air freight. Credit: Bosch

Reaching zero carbon
Mezger-Behan said the tier supplier’s roadmap to reaching zero CO2 emissions by 2020 would involve the elimination of 3.3m metric tons emitted at present, based on figures from 2018. She explained that becoming carbon neutral would mean tackling both direct emissions and indirect ones relating to purchased energy. For Bosch, this will involve four steps: a focus on increasing energy efficiency in production; the use of new clean power; buying in green electricity; and offsetting emissions. This year, the company will analyse other indirect emissions not yet covered by the plan and will also aim to join the UN-backed Science Based Target Initiative.

She suggested that the four-stage approach is not necessarily a case of going directly from the first to the final step, and that patience and planning are required when it came to seeing the benefits of certain steps. “Just because [certain] things take a little bit longer, it doesn’t mean that we don’t want to start now,” she said.

“The role of logistics in the PEP [product engineering process] is much stronger and gives us an opportunity to make clear what we require from our engineering departments, but also from our production in order to achieve these [sustainability] targets” – Christine Mezger-Behan, Bosch

All of this comes at a cost, of course. According to Mezger-Behan, Bosch is spending around €1 billion on energy efficiency improvements and a similar amount purchasing carbon-neutral energy supply and carbon credits. Yet she pointed out that some of this can be clawed back through lower energy consumption, leaving total costs at €1 billion up to 2030. The financial savings which can be made because of the energy savings help to bring key business objectives into alignment, she said, which has not always been the case when it comes to sustainability.

Further good news is that logistics seems to be occupying greater prominence than a few years ago and is starting to have greater influence on product development, she suggested. “The role of logistics in the PEP [product engineering process] is much stronger and gives us an opportunity to make clear what we require from our engineering departments, but also from our production in order to achieve these [sustainability] targets.”

The full report from the Automotive Logistics CEE Summit is available here.