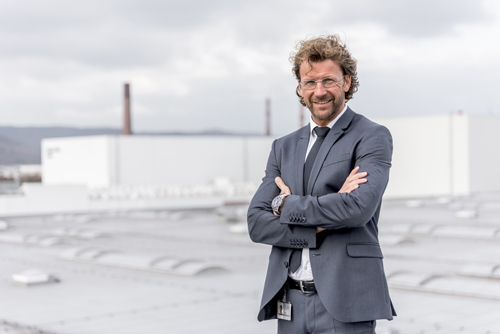 Dr Claus Wriebe has been working in Volkswagen's spare parts logistics for more than 14 years, and took over as head of Depot Kassel in early 2014

In a three-part report Automotive Logistics explores the scale and importance of the Volkswagen Group's colossal parts operations, centred around Kassel, Germany

Managing service parts distribution is as complex as inbound production logistics, but without the benefit of volumes converging at assembly plants. Carmakers have always had to source thousands of parts at relatively low numbers and distribute them across scattered retailer networks. However, these divergences are increasing with an ageing car population and more model launches. Since OEMs must provide genuine parts for many years, some products risk facing long lead times and delays – which could damage a brand’s reputation, or allow independent distributors to gain market share.

The difficulty is often in the supply chain, as suppliers reserve capacity to serve models in series production ahead of smaller aftermarket orders, especially during shortages. The problem is compounded when models go out of production – usually after seven years – and suppliers may no longer build the parts at all. A recent study by consultancy Ricardo suggests aftermarket shortages are exacerbated by shortening product cycles, which put more pressure on new vehicle supply, as well as by consumers keeping vehicles longer. In response, OEMs buy parts bundles to cover years’ worth of stock; but that drives up inventory costs, and risks over- or undersupply without good forecasting.

One way to limit fragmentation in the aftermarket has been to centralise parts in ‘source’ or ‘master’ warehouses. However, with the growth of new markets, more common parts across production locations, and growing model options and derivatives, it is harder to find a supply chain’s ‘centre’. Manufacturers need to manage rising stock assortments, many with wildly differing demand, stretched over long periods of time, for parts that can be used across continents.

At the centre of the aftermarketFew OEMs face as much aftermarket complexity as the Volkswagen Group. As the company provides genuine parts for 15 years after production ends, that means around 22 years of coverage for a growing number of parts. As of June 2015, the group’s ‘car parc’ – the number of vehicles for which it provides parts – surpassed 87m units and 330 models across its 12 brands. Stock assortments, which are based on part numbers or combinations, have surpassed 1.65m.

The Konzern Vertrieb Original Teile und Service (Group Genuine Parts and Service division) is responsible for the global aftermarket. The division runs 19 master warehouses supplying 113 wholesale or regional depots; these, in turn, serve more than 20,000 dealers across the world.

Inside and outside Depot Kassel

Other stories in this feature
Despite this globalised network, for 20 years a heart has been beating at the centre of most of Volkswagen Group’s aftermarket supply chain. You might imagine this site to be at one of the company’s massive production or sales poles, like its headquarters and largest plant in Wolfsburg, in Lower Saxony; or Audi’s Ingolstadt plant in Bavaria; or even joint venture sites in China, the carmaker’s largest single market.

Important as each of these locations is, they all connect to another point in the service parts supply chain based in Kassel, in the central German state of Hessen. Here, 20km from the city centre, in a suburb called Baunatal, five square plots of buildings spread out by the banks of the Fulda River, their roofs glaringly white next to the small forest and farm fields surrounding them on one side. This is the Original Teile Center (original parts centre, or OTC), the largest spare parts warehouse operation in Europe, and part of the sprawling Volkswagen Kassel Werk, the grey halls of which are cleft from the OTC by the A49 autobahn.

The OTC is the core operation for a semi-autonomous network of facilities called Depot Kassel. Despite the name, it is neither just a warehouse nor only in Kassel, but spread over ten different locations and 29 warehouses, including in-house and external sites around Kassel and Germany. Two warehouses in Singapore also exchange material with the OTC, carrying parts for distribution to wholesalers in Asia Pacific, including South-East Asia, South Korea and Australia.

“The OTC is a group function, so it is more than a logistical operation,” says Dr Claus Wriebe, who took over as head of Depot Kassel in early 2014 after 15 years with the company in various roles in the Genuine Parts division. “Group brands are very strong and each have their own aftersales business, but we support the brands in different technical topics concerning the aftersales business, such as commercialisation activities and supply chain planning.”

Depot Kassel is one of Volkswagen’s 19 master depots serving regional wholesalers, but it dwarfs the others in scale. At 1.2m sq.m of warehouse space in total, it is as large as the other master depots combined and accounts for around half the wholesale revenue for the parts division; the next biggest depot does just 10% of Kassel’s volume.

Depot Kassel holds the common global parts for all Volkswagen Group brands and the exclusive parts for Volkswagen passenger and commercial vehicle models and Audi. It also holds ‘FiB’ parts for other brands, including Skoda and Seat. FiB stands for Fahrzeugintelligente Bauteile, or ‘intelligent vehicle parts’, which are programmable parts like keys, mechatronics and control units. Besides the five buildings of the OTC, there is a dedicated building at Kassel for FiB parts.Kassel also holds some exclusive parts for other marques, though the inventory pattern for these is complex across the different brands and their own aftermarket operations.

While its largest distribution is to European depots, Kassel also delivers to global wholesalers. The concentration of stock here, and the variety of inbound and outbound routes, makes its freight as voluminous as some assembly plants: on average, the OTC receives and dispatches around 370 trucks, 120 rail wagons and 80 containers every day. It also flies thousands of parts daily from Frankfurt or Hanover airports.

Keeping up with changePartly because of the supplier capacity issues mentioned earlier, inbound order lead times for service parts are long, ranging from 30-90 days, according to Wriebe. While the parts division has an agreement with plants that it can take a part from series production when there is a shortage and a ‘car down’, Depot Kassel’s comprehensive stock availability is necessary to smooth supply. The warehouses are a direct extension of wholesalers’ day-to-day business, as regional depots typically hold only 70,000 part numbers, with the rest stored in master warehouses like Kassel.

That makes delivery reliability crucial. For volume orders, wholesalers in Germany and Europe receive parts within eight days. Orders from overseas are fulfilled within 15 days. Rush orders are filled in a day or less, globally.

For Germany and Europe, 95% of parts at Kassel are currently available for urgent orders. “It is part of our dailylife to manage crunch points, such as parts shortages that might come with increases in production, or supplier issues,” says Wriebe. 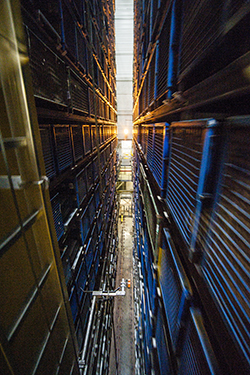 Volkswagen is investing heavily in this daily operation. It recently completed a €30m ($31.7m) project for a high-rack storage area for picking, and has also extended an automated conveyor system and refitted its automated small-load carrier (KLT) facility within the OTC. There are further plans to install higher levels of automation for packing ocean containers in the OTC for outbound optimisation.

Network changes are also on the horizon. To save costs, Wriebe will shift two warehouse locations in Singapore to one in Malaysia by 2018. Plans for a highly automated ‘ideal packaging warehouse’ may further change the network structure around Kassel.

Wriebe also emphasises efforts to reduce inventory, stating that Volkswagen’s strategy has historically been somewhat more inventory-heavy than Japanese OEMs, like Toyota. For example, Kassel generally stores one month’s worth of ‘A’ parts, the fast movers. Slower moving stock can range from a few months to several years. The reason, in part, has been that warehousing costs in Germany are relatively inexpensive compared to Japan. Furthermore, the challenge of supplying parts for 15 years after production ends requires higher inventory levels.

However, parts diversity is upending this model, and Volkswagen is doing more to slow inventory and stock variety growth. The company is reworking its SAP system to allow crossdocking at the gates of the OTC for inbound parts, as well as to dispatch more direct deliveries from external warehouses or suppliers. Depot Kassel is also involved in ‘Big Data’ and predictive analytics projects to improve demand forecasting and picking accuracy. Wriebe has even introduced a Volkswagen version of a kaizen programme, focused on continuous improvement across the warehouses.

Along with reducing inventory and increasing efficiency, Wriebe and his team are studying the impacts that technology, including digitalisation and predictive maintenance, will have on the aftermarket by 2020 and beyond.

“We have projects exploring 3D printing, and we’re carefully studying how we can adapt our processes for megatrends like the connected car over the next decade,” says Wriebe. “We have to be ready for changes.”