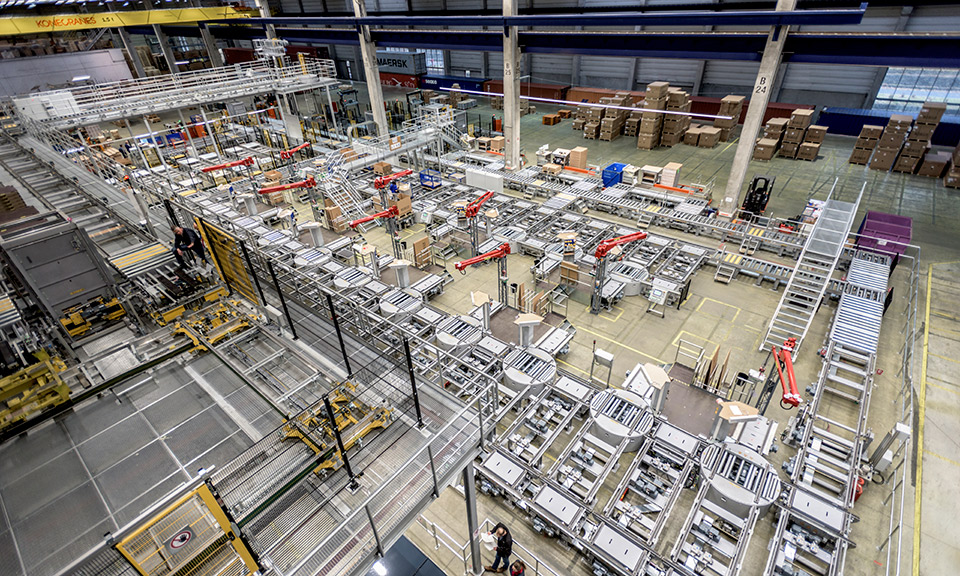 [sta_anchor id="1"]In many ways, the heart of Volkswagen Group After Sales – the OEM’s service parts and aftermarket division – is its massive Original Teile (Parts) Centre (OTC) in Baunatal, near Kassel, central Germany. This impressive storage and shipping centre serves destinations across the world, including European dealerships as well as distribution centres and importers to sales regions like China, the US, South America and South-East Asia.

The OTC is made up of five large on-site warehouses, several smaller adjacent ones for special parts and hazardous materials, plus a number of satellite operations in the wider Kassel region. The OTC is also the central operation of an even larger grouping of around 30 warehouses in Germany and further afield, called Depot Kassel, which holds exclusive parts for Volkswagen passenger and commercial vehicles, Audi models, as well other common and programmable parts for brands like Skoda and Seat.

Despite the name, Depot Kassel is a global operation. For example, the OTC also exchanges parts with warehouse operations in Singapore (which will shift next year to Malaysia) to serve locations across Asia and Australia.

[in_this_story align="right" border="yes"] The warehouse and distribution hub is located adjacent to the Kassel plant, which builds transmissions and emission control systems for the group globally, and shares some storage efficiencies and direct supply of parts between the plant and OTC.

The OTC in Baunatal itself is the largest spare parts warehouse in Europe. With its size and scale, the multiple warehouses onsite contain high levels of automation, from long-stretching conveyor systems to automated storage and retrieval systems, automated guided vehicles (AGVs), scanning and picking technology, as well a highly advanced IT setup. 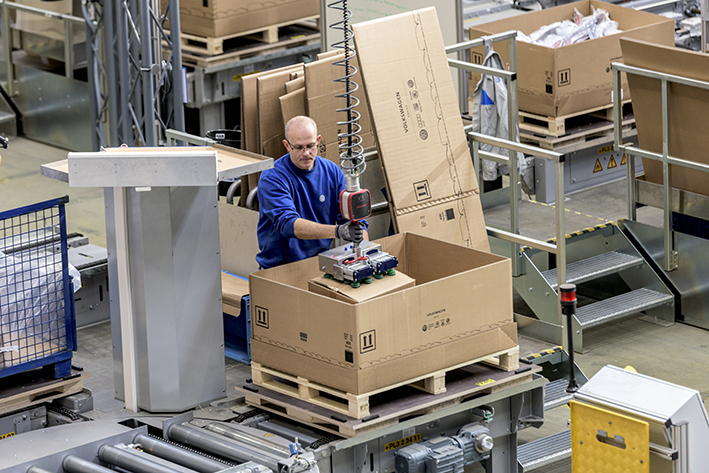 But despite its size, automation has not been universally applied at the OTC. One of the operations that had until recently been run using more traditional, manual processes, was the ocean freight centre (OFC) located within OTC 1 – the primary receiving, picking and replenishment warehouse at the centre.

This packing area is the lynchpin of a growing shipping business for Volkswagen Group After Sales. In 2016, it oversaw packaging and stuffing for the overseas shipment of around 6,500 ocean containers (around 13,000 TEU) full of aftermarket parts. While this volume is small relative to the number of ocean containers Volkswagen Group ships from Europe for production parts – which numbers around 250,000 TEU per year, it represents growth of around 50% over the past five years, according to the company. The efficiency of this process is critical to cost control and ensuring satisfactory customer service.

With this growth in overseas shipments, Volkswagen Group was facing increasing capacity constraints in its overseas packaging operations, according to Frank Neurath, manager of outbound sea freight for aftersales at the Volkswagen Group. The company thus decided several years ago to invest in conveyors to connect the ocean freight centre with storage areas across the OTC – switching from a ‘man to goods’ process to a ‘goods to man’ setup, in which material is brought automatically to workers for picking, rather than requiring workers to move toward parts or storage areas. Volkswagen has also improved the ergonomics and handling for packing material.

In doing so, the Volkswagen Group After Sales division expects significant savings in handling and labour costs, as well as an important reduction in overall handling and shipping time.

Repackaging an old business modelThe ocean freight centre is characterised by a large repacking operation for ocean container shipments. Parts are stored across various locations in the OTC in metal containers of varying sizes; they must be moved to the OFC and resorted into palletised cardboard boxes and crates used for ocean dispatch, says Neurath.

“For shipments to China, which account for 10% of the total, we do not receive the empty packaging back. Thus, it is cheaper to ship it one way only,” he says. The OFC also ships 10% of parts to the US, using with one-way packaging. 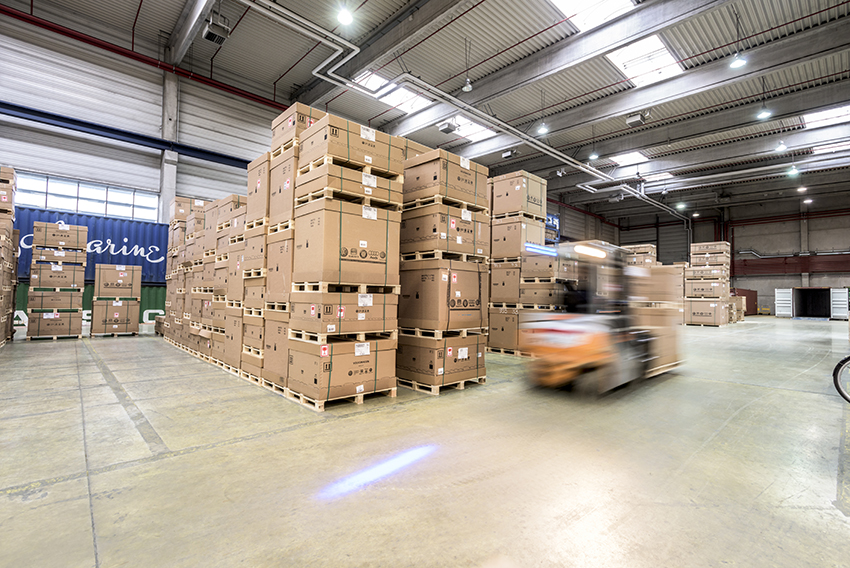 As well as avoiding the prohibitive costs of returning empty metal containers, repackaging also helps to keep orders safe and damage-free, as well as allowing individual parts to be shipped without delay, Neurath says.

Up until last December, this repackaging operation at the OFC was mostly a manual operation, with operators having to go and pick the right boxes of parts from the site’s storage areas and large items being brought to the repackaging zone by lift truck. Following two years of construction and several phases of implementation, the carmaker has now ramped up a new process in which a 550 metre-long conveyor connects the high-bay storage area within OTC 1 (where most parts destined for overseas are held) to the new repackaging centre. It has also redesigned the repackaging area itself, with nine new packaging stations, each served by new vacuum handling devices to improve operator ergonomics.

The new conveyor-based operation now accommodates all the overseas ocean destinations served from the OTC, including regional Volkswagen entities and distributors. “With only one customer initially in December, the conveyor belt ran very fast. We have 54 customers and since February, we have added them all to [sta_anchor id="2"]the conveyor system,” confirms Neurath.

Conveyor connectionsThe new automated repackaging centre conveyor, consisting of roller and chain sections, is connected to a wider conveyor system that already included connections from OTC 1 to OTC 2, while Neurath says Volkswagen is currently working a further connection from OTC 2 to OTC 3, both of which have further storage and distribution functions.

As part of the overall OTC inventory management system and network, some parts are also stored at separate warehouses that are close to the OTC, like larger, heavy parts including motors (a new centre for classic parts is also under construction). These goods are prepacked into wooden crates before being shipped to OTC 1.

The packaging process is driven by the OTC SAP system. As orders come in through the SAP enterprise software system, repackaging staff check the order requirement date along with the part name, weight, customer number and country-of-origin, before boxes are called in from storage.

Small and medium-sized metal boxes of parts are placed onto the conveyor in the storage area and moved automatically to the repackaging stations. Large boxes are still brought in by forklift or even AGV.

Once parts arrive at the ocean freight centre, operators carry out the necessary repackaging using the vacuum handlers to transfer parts from the metal boxes as required. Neurath describes the vacuum handling devices as “one of the main improvements” in the new set-up, especially for handling the medium-sized and larger boxes. He stresses that use of the vacuum handlers “enables handling without strength requirements” from employees.

“We run nine packing stations per shift for three shifts, with 40 persons on a team per shift. Between 10 and 15 persons have physical limitations, which may mean that they cannot handle heavy parts, stand all of the time, or bend. The use of the flexible vacuum hose relieves these requirements,” he comments.

Parts are repacked into one of several different kinds of crates and boxes, which are also stocked in the high-bay storage area. Despite the increased level of automation, the process still leaves considerable discretion and power to each worker.

For example, each packaging station handles one customer at a time, with individual station operators deciding what kind and size of container will be needed. Small-and-medium sized parts may be packed into the same box, depending on weight. Exactly how the parts are arranged is also up to the operator, who may decide, for example, to separate lighter parts to one side of a box to avoid damage. 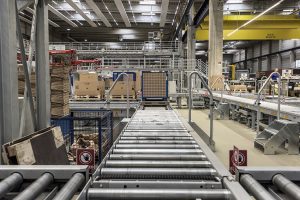 he new automated packaging conveyor has enabled a switch from ‘man to goods’ flow to ‘goods to man’, reducing handling, labour costs and ultimately overall shipping time for outbound parts

Once boxes are fully packed, they move to a tenth station, in the centre of the packing area, where an operator applies packing slips and other documentation, before palletised crates and cardboard boxes are picked up by forklift and loaded into the ocean container as before.

Once packed, ocean containers move first by truck to a logistics centre in Kassel before being put on trains to the ports of Hamburg and Bremerhaven for onward [sta_anchor id="3"]shipment.

Packing in the benefitsAs well as improving the ergonomics of the whole repackaging operation, the new approach at the OFC has saved space, improved order fulfilment accuracy, enhanced efficiency and reduced lead times, says Neurath.

“With our new system, we no longer need to search at different times for portions of a particular order,” he says. “For example, if we have three boxes to ship to Singapore today, and tomorrow we will have two more, we will wait until the cardboard box is full before packing it. Previously, the boxes would be in one area waiting for additional repacking, and the forklift driver had to check for them. Now, storage sends them by conveyor belt. We can load the container sooner and forklift drivers spend less time searching.” 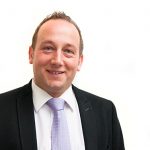 "With our new system, we no longer need to search at different times for portions of a particular order... We can load the container sooner and forklift drivers spend less time searching"– Frank Neurath, Volkswagen Group

The new operation has helped reduce overall lead time in the warehouse by as much as half a day from order receipt to goods repackaging. While Neurath does not specify exactly how long the overall time is, he calls the saving “significant”. By improving warehouse handling times, Neurath also points to further delivery-time savings from improving truck and vessel connections. “Overall, we plan to achieve a 40% improvement in efficiency based on time spent,” he says.

Despite these challenges, Volkswagen Group After Sales has now successfully revitalised its repackaging process for ocean exports to aftermarket customers – saving time and space as well as improving overall delivery times. While the company has not revealed the figure behind the investment, the savings in lead time and handling are expected to reap returns. And the OTC, which is already among the most advanced warehouses in the world for spare parts, is now better prepared to handle further growth for global parts shipments.