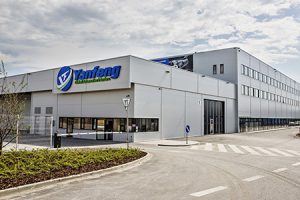 The new plant, near Tabor in South Bohemia, currently employs 170 staff but will increase this to 300 by the beginning of next year as production is ramped up, stated the Chinese-headquartered firm. Ultimately, the new facility will create up to 500 new jobs.

"With Planá nad Luznicí, we have set up additional capacity to our existing production network with state-of-the-art technology in eastern central Europe. We will now gradually start to ramp up production and will be able to robustly start operations and mass production by early 2018," said Jochen Heier, vice-president and general manager Europe and South Africa at YFAI, at the opening ceremony.

The opening of the new facility follows the recent extension of the company's technical centre in Trenčín, Slovakia, and the opening of its automotive business Centre in Bratislava, Slovakia, a few weeks ago.

YFAI also operates a production site in Žatec, in the Czech Republic, where it makes door panels and floor consoles, as well as other facilities in in Pápa, Hungary, and Námestovo, Slovakia.

YFAI is a joint venture between Chinese automotive supplier Yanfeng and US automotive seating manufacturer Adient (the latter formed last year to separate off the seat business of Johnson Controls). Based in Shanghai, it operates over 100 manufacturing plants and technical centres in 18 countries, employing more than 33,000 globally.