Spain’s auto industry to get billion-euro boost from government 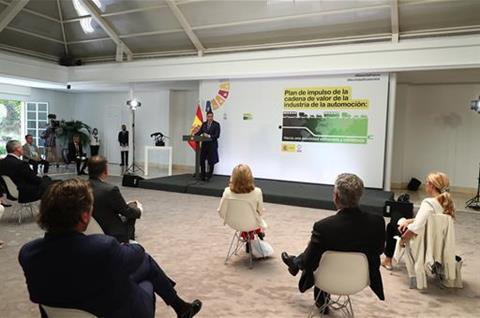 The Spanish government has announced a €3.75 billion ($4.2 billion) stimulus programme for the country’s automotive sector, designed to mitigate the impact of the coronavirus and boost the sale of low-emission vehicles.

At a meeting in the Spanish capital Madrid last week prime minister Pedro Sánchez revealed what is officially called the ‘Plan to Boost the Value Chain of the Automotive Industry towards Sustainable and Connected Mobility’. It includes 20 measures aimed at both short- and medium-term remedies related to the economy, tax, regulation, logistics, competitiveness, vocational training and skills, sustainable public procurement and strategic planning.

The plan is designed to support the rapid recovery of an automotive industry that accounts for 10% of GDP, 19% of all exports, and employs 650,000 people directly (and 2m in the wider supply chain). The government also aims to alleviate the adverse effects of Covid-19 on the competitiveness of the automotive sector in Spain with the measures taken.

Spain has been punished by the pandemic, which led the government to impose one of the world’s strictest lockdowns, with OEMs such as Seat and Ford out of action for months. This has not been helped by the news from Japanese OEM Nissan, who announced last month it would close a plant near Barcelona, costing the local area 3,000 jobs. To make matters worse, the country’s economy could shrink as much as 15% in 2020, according to worse-case scenario estimates by the Bank of Spain.

Green goals and growth
The government’s plan includes measures worth €450m to renew Spain’s vehicle fleet. Vehicles in Spain have an average age of 12.7 years, while the market for vehicles over the age of 20 has grown by 18% in recent years.

As part of that renewal the new initiative also introduces the 2020 edition of the Programme to Boost Electric and Sustainable Mobility (Moves) with a €100m provision geared towards the acquisition of alternative energy vehicles and the rollout of supporting charging infrastructure.

Sánchez confirmed his commitment to “mitigate climate change” and said he aims to achieve the “zero emissions by 2050” target. As reported by Spanish newspaper El País, the automotive industry is said to have pledged to make between 700,000 and 800,000 electric vehicles in Spain, which would represent 12% of the European market share.

Spain is Europe’s second largest car producer behind Germany and as well as Seat and Ford, hosts production plants for Volkswagen, Groupe PSA and Renault. CIE Automotive and Gestamp Automocion, both in Madrid, are among the largest Spanish automotive parts makers.

According to data from the Spanish Association of Automotive (Sernauto), Spanish automotive suppliers produced €35,822m in 2019 of which 60% was exported both inside and outside the EU. Germany and France are the main destinations inside the EU, while the United States has become the first destination outside the union for Spanish exports with Morocco following.

María Helena Antolin, president of Sernauto believes the government’s cash injection will now speed up production, and, consequently, the market. “It is a determinant and necessary issue regarding the strategic role of our sector in the economy and employment in our country,” she said.