BMW Group is now using a data cloud to manage autonomous logistics at its component plant in Landshut, Germany, following trials with the Technical University of Munich (TUM).

Following preliminary tests under laboratory conditions on the TUM campus in Garching, the Robot in the Cloud project at the Landshut plant is ready to pioneer the first entirely cloud-controlled logistics. 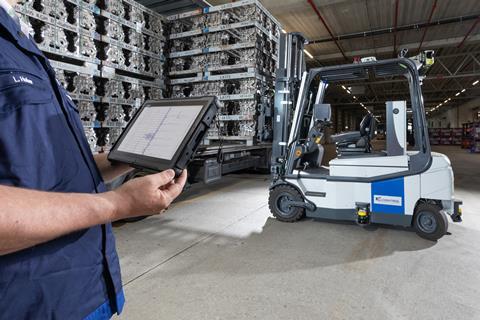 BMW is now using the cloud to manage autonomous logistics at its component plant in Landshut, Germany

“With this pilot project, BMW Group Plant Landshut is setting a new benchmark for the intelligent, connected factory. The increasing digitalisation of production also includes logistics flows,” explained site manager Dr Stefan Kasperowski. “Behind the project is the aim of fully connected production, in which autonomous transport systems, logistics robots and mobile devices seamlessly communicate with one another and with the control system.

After that, 5G technology uploads the calculations to a high-performance data cloud. The new 5G wireless technology allows large data volumes to be transferred within a very short time, enabling real-time connectivity between machinery and equipment. It also allows billions of machines to be connected and transmit data in near real time, forming an artificial ecosystem designed to streamline output.

Automating complex processes and the automated control of the forklifts reduces downtime, and increases the performance and efficiency of the entire logistics system, according to Ludwig Huber, who is responsible for integration at the Landshut plant.

The new system was implemented by technology provider Congiv, from Munich, which is installing the 5G network at the plant. KS Control is supplying the self-driving forklift trucks. The advanced monitoring for the project is provided by TUM.

The initiative was launched last year by the company’s technology and logistics development team. It was designed to investigate how self-driving logistics vehicles can be used in a production setting.

The €1.2m project was founded by the Bavarian Ministry of Economic Affairs and took two years to reach its current form.

In another move toward greater automation, BMW is now using automated guided vehicles (AGVs) from EK Robotics to transport steel blanks at its Swindon plant in the UK for Mini production.