BMW now working with NVIDIA to advance AI in logistics 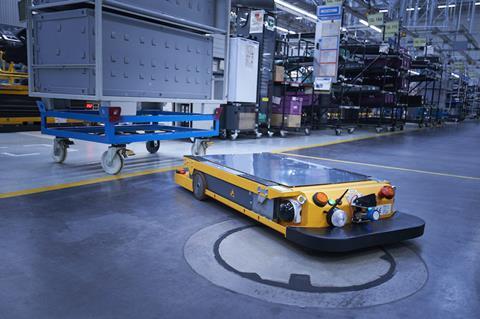 Building on the advances it has made over the last four years with digital technology in logistics, the German company is now working with US software company NVIDIA.

According to BMW the robots can now identify obstacles such as forklift trucks, tugger trains and people more quickly and select alternative routes. They can also learn from the environment and apply different responses to people and objects.

The STRs are one of five AI-enabled robot solutions the carmaker is developing with NVIDIA using the Issac software platform to improve logistics processes. These include both navigation robots to transport material autonomously and robots used to select and organise parts. As first outlined in 2018, the other four are handling robots: SplitBot, PlaceBot, PickBot and SortBot (see box).

SplitBot – takes full plastic boxes from the pallet in the incoming goods area and places them on a conveyor system that transports the boxes to a warehouse. The SplitBot also makes sure the containers are lined up correctly for automated storage. Using AI the SplitBot can detect and process up to 450 different containers.

PlaceBot – works directly on the assembly line. The movable robot unloads tugger trains and places boxes loaded with goods on a shelf. It uses an image recognition system to classify these small load carriers and determine the ideal grip point from the combined input of sensor technology, camera and artificial intelligence. It can also move autonomously in a predetermined area. 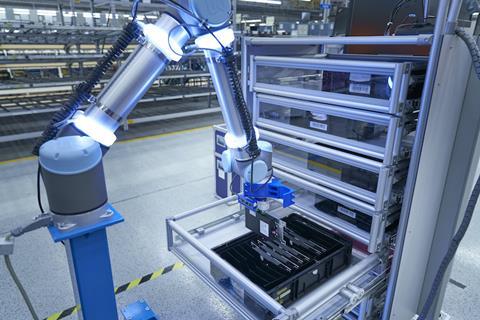 Over the long term the PickBot should be able to recognise and handle up to 50,000 small parts

PickBot – collects various small parts from supply racks, recognising them with a self-developed, self-trained AI and calculating the right grip point. Over the long term, the PickBot should be able to recognise and handle up to 50,000 small parts. It is being deployed at BMW’s Leipzig plant.

SortBot – deployed in series production at Plant Leipzig to stack empty containers on pallets before they re-enter circulation.

The robots are being trialled at a number of German plants and at the carmaker’s logistics laboratory in Munich, Germany. AI components are also being tested at NVIDIA’s facility in California.

“The use of high-end AI and visualisation technologies to redesign our logistics is revolutionary,” said Jürgen Maidl, head of logistics, BMW Group Production Network. “Our collaboration with NVIDIA is allowing us to develop state-of-the-art Industry 4.0 technologies. With this high-end technology, we can further optimise our logistics innovations and processes.”

BMW is also using AI in logistics planning. Using 3D scans the robots can recognise different objects – such as containers, building structures or machines – and use this information to create a virtual layout plan through high-resolution 3D scans of entire buildings and factories. The technology allows the engineers to remove individual objects from the 3D scan using 3D planning software and then change them individually. This makes it easier to simulate and comprehend layout changes within the production halls, said the company.

Last year the carmaker announced it had begun using a digital cloud platform built on software supplied by Microsoft to increase manufacturing and supporting logistics productivity. The Open Manufacturing Platform (OMP) is designed to accelerate the use of internet-of-things (IoT) technology in the supply chain and factory. BMW said it would be shared among OEMs, tier suppliers and logistics providers to bring efficiency across manufacturing and supply up to final assembly.