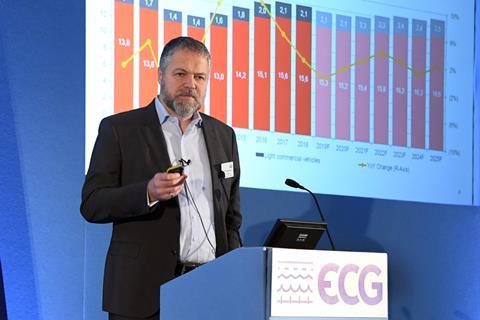 Despite the fact that real GDP growth in the EU has slowed down from 1.96% in 2018 to 1.11% in 2019, PwC Autofacts’s global lead analyst Christoph Stürmer does not believe the automotive market is in trouble, because the broader trend is one of growth.

Speaking at the ECG conference in Berlin, Germany last week, he said: “We’re not on any kind of low point. Despite the crazy peak of low vehicle registrations this time last year, global automotive markets have increased more than 50% since 2009.”

“The UK market isn’t doing too well, but that’s because of a local problem [Brexit],” explained Stürmer. “Partially resulted from the worldwide political turmoil and uncertainty, the real GDP growth in Germany has slowed down to 0.5% and Italy has found itself in a deep recession. It’s a coincidence of several things going wrong…. [but] we still don’t see things really sliding. I’m hesitating to call it a general crisis.”

The bright side of the picture, he said, lay in Central and Eastern Europe, which is doing “very well” in terms of new registrations. “The balance of total vehicle demand in central Europe between new vehicle demand and used vehicle shipments is slowly changing. It’s increasing in terms of new vehicle shipments.” Stürmer put this down to the free flow of trade in the EU, which allows OEMs to match and balance volumes on both new and used vehicles.

PwC believes that Volkswagen Group’s brands are going to continue to lead the market. “We all know they’re looking for new capacity. It will continue to invest in Europe and wider Europe,” said Stürmer. The group is expected to produce 5.6m units in 2025 in the EU. In fact, VW had announced the construction of a new plant in Turkey, with production scheduled to begin in 2022, but the company has postponed its plans after worldwide condemnation of Turkey’s military incursion into Syria this month.

New emissions tests
Given the economic outlook and the planned introduction of new rules relating to emissions, new light vehicle (LV) registrations in 2019 are expected to decline in EU and European Free Trade Association countries, to 17.4m units from 17.7m in 2018.

Peter Weiss, former DaimlerChrysler and FCA executive, who was also speaking at the conference, thought that C02 targets had changed product profitability, citing the negative impact on internal combustion engines (ICEs) and suggesting that battery-electric vehicles would be necessary for compliance. “OEMs must react by adjusting their strategy and product plan, including timing of production and supply base readiness,” he said. 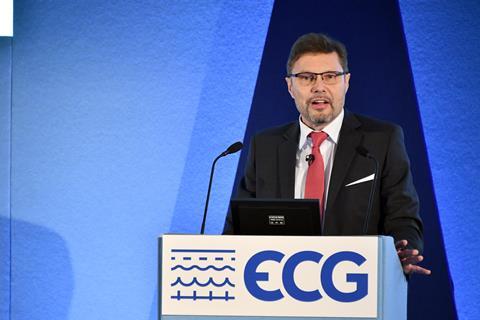 According to ECG, there will be several possible consequences for the vehicle logistics sector following the introduction of worldwide harmonised light vehicle test procedure (WLTP), real driving emissions (RDE) and C02 emissions rules.

These include delays in EVs and hybrid sales in the second part of 2019 as OEMs try to meet their specific emissions reduction targets and avoid paying €95 per gram of exceedance, the ending of some car models and engines, delays in production and vehicle approval, and increased weight and decreased load factors, which it says is already having an impact on road transport and shipping.

There is also the risk of higher manipulation of vehicle models available on the market. According to ECG, in order to meet their targets from 2020 onwards, OEMs may decide to stop the sales or restrict the supply of certain derivatives which emit too much CO2 and would increase the CO2 emissions fleet average.

“We expected a weakness in the market because it was entirely supply-induced,” said Stürmer, who agreed that super fuel-efficient vehicles were not coming into the market as quickly as predicted. “We’ve seen delays in terms of starts of productions, a staggered start. 2020 year will be a year of transition with even more uncertainty in terms of things not going quite as expected,” he predicted.

“We have to get everything set up for 2021 to be a successful year,” Stürmer continued. “This will be when the markets will be supplied with enough vehicles and they’ll be in the right mix so the auto industry doesn’t burn money in fines.”

Diverse powertrains
Looking further ahead, Stürmer predicted that in 2025 EV production will represent more than 10% of total production, explaining that this was a lower estimate as it only accounted for model programmes that been announced.

Referring to hybrids, Stürmer said that multiple different powertrain types are “not going to go away” and mentioned Daimler, which has said it is not going to develop any new ICEs. “This means they have to squeeze contributions to 2020 and 2025 targets out of their existing engine line-up. They can only do this by adding electric auxiliary devices,” he explained.

Stürmer predicted that by 2025, around 47% of all vehicles will have an electric powertrain, compared with 5.8% in 2018. “The mix of vehicle types will get much more diverse and if you’re looking for growth, the alternative powertrain sector is the growth sector in the auto industry,” he advised.

Read more about developments in the European market, including EVs, in our report from the Automotive Logistics Central and Eastern Europe conference in October.

While the finished vehicle logistics industry has been working on managing risks by establishing new routes and opening ports to prepare for Brexit, Stürmer said there was still a lot of uncertainty regarding inbound logistics.

Stürmer also revealed that a staggering 25% of UK vehicle production lies in just one car – the Nissan Qashqai. “If anything goes wrong with that car, the UK has a big problem,” he warned. In a bad sign for the UK, its maker has already pulled production of its Infiniti models from the Sunderland factory and has cancelled plans to manufacture the X-Trail there. Nissan said it was restructuring its operations in Europe.

Discussing the Dover to Calais route, which is the principal connection between the UK and the EU, Stürmer pointed out: “If you can’t get the parts into the country it’s very hard to get cars out of the country – because in between, they can’t be built.” 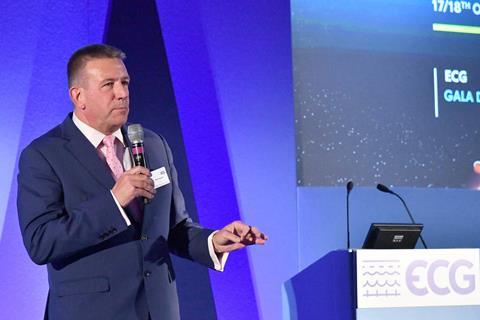 ECG executive director Mike Sturgeon backed up this point. “If we end up with a no-deal Brexit the risk is more to the inbound because the finished vehicles are largely going through ports, which are already set up to handle non-EU traffic.

“The biggest risk to the UK supply chain is the Dover-Calais route, which doesn’t have the set up or the processes to handle trade from non-EU [countries].”

Stürmer advised delegates to discuss the strategy for inbound logistics with their customers. “The problem with inbound logistics is it’s not just just-in-time, it’s just-in-sequence; there’s not a lot of leeway. Any disruption to those flows is going to have a knock-on effect.”

At the time of writing, the Brexit question is still unresolved. British politicians have, in theory, accepted the renegotiated deal delivered by Prime Minister Boris Johnson, but rejected his plan to keep to the official deadline for departure of October 31. The UK now faces the prospect of a general election and change of government, which can only add to industry angst over the lack of certainty.