The decrease in ro-ro capacity for vehicle shipments since August 2022, which is pushing up unit rates for carmakers significantly, is prompting them to look for space in containers, an option that that simply was not there six months ago.

That search for container capacity for finished vehicles is good news for the providers of containerised vehicle services. 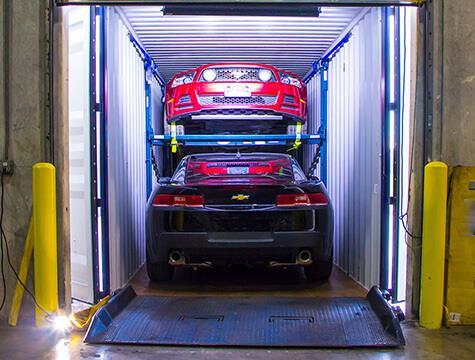 The reason for the relatively sudden shortage in ro-ro capacity since the summer is simple. While assembly plants have been gradually building up volume output post-Covid, the vessels that ro-ro operators scrapped or laid up during the pandemic have not been replaced. Finished vehicle logistics providers have been wary of placing new orders for vessels given the market uncertainty and the levels of investment required.

Vehicle exports from China are also putting demands on ro-ro capacity. According to the latest data from market analyst Vessels Value, Chinese finished vehicle exports topped 3m units by December 2022, a 54% growth year-on-year. Demand for China-made EVs was strong, with Tesla increasing deliveries from its gigafactory in Shanghai.

That situation and the shortage of available ro-ro capacity has even led a number of carmakers to buy their own vessels and operate them as joint ventures with logistics providers. China is now targeting overseas markets for sales of its EVs and exports doubled in November last year, with European countries, including Norway, Belgium and the UK, among the biggest importers.

However, even if all the ro-ro vessels due for completion in 2023 are delivered, it still will not satisfy the demand for volume shipments out of China. The China market is planning to export 2.3m units to Europe this year, according to Christoph Seitz, co-owner and managing member of CFR Rinkens, a specialist in containerised vehicle shipment services. However, the ro-ro capacity currently expected in 2023 will only serve half of that number. That has led carmakers to book containerised vehicle shipments.

Longer horizons
The shortage in ro-ro capacity is confirmed by Wallenius Wilhelmsen, one of the world’s biggest providers of finished vehicle ro-ro services. According to Eric Solum, head of global market at the company, overall vessel capacity was tight in 2022 and that is expected to continue.

According to Solum, there are only 11 vessels on order for delivery in 2023.

“The low number of new vessels coming this year has limited impact on the general capacity situation,” he said on the company’s website, adding that the company was paying special attention to how it loaded its vessels to optimise capacity while maintaining safety and adequate cargo spacing.

Finished vehicle and ro-ro capacity issues will be central to the FVL dedicated sessions at this year’s Automotive Logistics Europe conference, which is being held in Bonn, Germany between March 21-23 this year

Solum said it was important that its customers had a “longer-than-usual horizon” when planning their vehicle logistics, though carmakers continue to be affected by variances in production as inbound supply issues continue.

The underinvestment in vessels has resulted in a capacity crunch that has driven up rates on both ro-ro and con-ro vessels. According to Vessels Value, average light vehicle spot rates on pure car and truck carriers (PCTCs) from Shanghai to north-west Europe (including the ports of Bremerhaven, Zeebrugge and Southampton)have increased around +17% in January, up $300 per unit compared to Q4 averages, based on $2,000 all in, excluding handling. 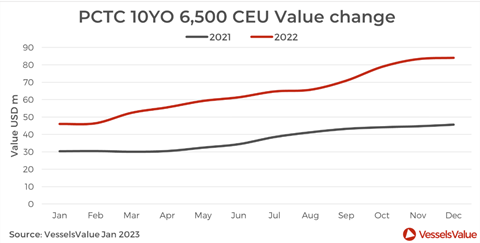 Calmer rates for containers
The container shipping industry had a tough three years since the coronavirus hit. In the midst of the pandemic, rates for 40-foot equivalent units (FEU) soared to more than $20,000 on China-US lanes. By May last year transit and arrival times were in the worst state they had been for 50 years, according to Drewry Shipping Consultants. Port congestion was a problem across the world, with high volumes reported in North America, Asia, Europe and the Middle East. Ports in China were badly affected by the country’s zero-Covid policy, with hundreds of ships backed up and unable to load or unload because of restrictions on terminal staff. The global disruption, which also saw record high rates for container shipments between Asia and North America, was forecast to last into 2023.

However, the container shipping sector saw a better-than-expected recovery toward the end of last year and rates have dropped. According to Vessels Value, spot container rates between Shanghai and north-west Europe have softened further in January following the Chinese New Year, averaging $1,700 all in per high cube FEU, excluding handling.

At the same time, rates for vehicle movements by ro-ro vessel have increased on all lanes because of the shortage in capacity. On the Shanghai to north-west Europe route Nash said OEMs have to pay four times as much on PCTCs versus container basis at present, subject to the freight forwarder or carrier offering directly. That is based on four light vehicles per each high cube FEU.

“That is a highly attractive proposition for OEMs, noting the container market is projected to be over supplied into the midterm, suggesting low box rates are here to stay,” said Nash.

Securing space
That sudden turnaround in available capacity between ro-ro and container shipping is welcome news for CFR Rinkens.

The company has a large inventory of dedicated container racking systems at its disposal, numbering around 5,000. Those racks, onto which cars are loaded before being lifted into the 40-foot equivalent units (FEUs) they are shipped in, have been stacked up since Covid disrupted the wider container shipping industry. However, in a rapid volte face, the company is now contemplating new orders following a rush by carmakers to secure space for vehicle shipments in containers.

According to CFR’s Seitz, the company is currently loading 200+ cars in containers daily for multiple OEMs, including Stellantis, BYD and Electra Meccanica. For China exports, the company is supported by three warehouses in Shanghai, two of which are hazchem certified for EVs, which are now considered dangerous goods. CFR is known to count Tesla as one of its major customers and like most major OEMs, the US carmaker has also added containerization to the outbound mix from its Shanghai factory.

Dangerous goods
The movement of EVs by both ro-ro vessel and container is becoming subject to greater restrictions following the major accidents, such as the destruction of the Felicity Ace car carrier, which sank in March last year after a fierce onboard fire with more than 4,000 vehicles onboard.

In August last year, global container giant CMA CGM issued a customer advisory notice that electric and hybrid cars be declared dangerous goods only and moved in reefer (refrigerated) containers with a letter of indemnity signed by the shipper. The company also stipulated that the battery charge in the vehicles being shipped be no more than 40% at the time of containerisation.

According to Seitz a number of smaller container carriers operating out of Shanghai are not accepting EVs under any circumstances despite the lucrative rates on offer.

For the larger operators, such as CMA CGM, the higher restrictions have not stopped requests for services. Since its takeover of Gefco, Ceva Logistics, which is part of the CMA CGM, has added a fifth service offering for finished vehicle logistics that brings into the newly formed division existing business lines in south-east Asia and Australia. They include providing services for the containerisation of vehicles for export from China.