BMW, Daimler and Volkswagen, have agreed with Germany’s cartel office, the Bundeskartellamt, to pay penalties totalling around €100m ($111m) for anti-competitive practices. The case related to purchases of engineered long-steel products, which are those related to steering rods, gear wheels, crankshafts, camshafts and connecting rods. 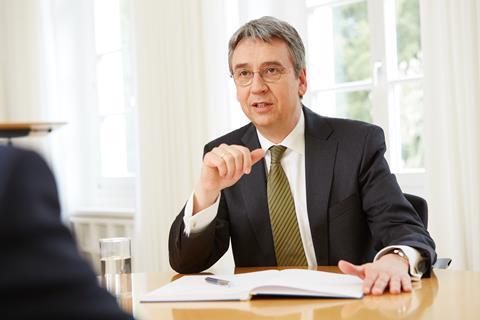 Andreas Mundt, president of the German cartel office, the Bundeskartellamt

VW, which was reportedly fined the most at €48.7m ($44.2m), described the matter as dealing with a grey area under anti-trust law, namely calculation of formulae for scrap and alloy surcharges on long steel.

“[They] were specified by the steel manufacturers to VW, otherwise deliveries [were] threatened to be cancelled,” the OEM told Automotive Logistics.

“The facts examined by the Bundeskartellamt with regard to Volkswagen are not classic cartel infringements, such as price agreements, territorial or customer allocations…[.] The fact that the Bundeskartellamt found misconduct at the downstream stage of the value chain is the result of a new restrictive decision-making practice which the Bundeskartellamt has only recently developed,” the company added.

Daimler, which includes the Mercedes-Benz brand among its models and agreed to pay a €23.5m fine, said: “Anti-trust law is a complex area of law. Moreover, from a legal perspective, the practices addressed by the federal cartel office are a borderline case under anti-trust law.”

BMW, which accepted a €28m penalty, said the pricing agreements in question had no impact on its vehicles’ sale prices as long steel accounts for less than 1% of a vehicle’s total cost.

VW also told Automotive Logistics it takes the proceedings and result very seriously, and cooperated fully with the cartel office.

“At the same time, Volkswagen welcomes the conclusion of the proceedings and the resulting legal certainty,” a spokesperson said. “Compliance with anti-trust regulations is a top priority for Volkswagen AG. A large number of new measures have been initiated and implemented in recent years to prevent future misconduct in this area.”

Insights gained from the long steel case have been incorporated into the training, it added.

The proceedings stemmed from representatives of the three OEMs meeting twice a year with steel manufacturers, forging companies and large systems suppliers between 2004 and the end of 2013 to exchange information on uniform surcharges for long steel products; scrap and alloy levies account for a large part of those products’ purchase prices.

“Insofar as the surcharges were no longer negotiated individually with the suppliers as a consequence of these talks, price competition between the companies on these price components was eliminated,” said the Bundeskartellamt’s president, Andreas Mundt.

In contrast to basic prices, surcharges are traditionally not negotiated but calculated according to sector-wide uniform formulas and added to the basic price as separate price components.

“In 2003 and 2004 the steel manufacturers unilaterally made certain changes to the surcharge calculation, in some cases under the threat of refusal to supply. As a reaction to this the discussions between the car and steel manufacturers and forging companies were taken up under the umbrella of the German association for steel and metal processing,” the Bundeskartellamt said.

“In the talks the representatives of the car manufacturers ensured one another that they would adopt the changes introduced by the steel manufacturers and continue to adhere to the established practice of uniformly calculated price surcharges.”