Audi has confirmed that it will be putting 10,000 of its employees working at the Ingolstadt and Neckarsulm assembly plants in Germany on reduced hours in June. A shortage in the supply of semiconductors, which is affecting the automotive industry globally, means Audi is having to cut output at the plants.

The latest move follows a similar one in January this year, when 10,000 workers were put on furlough because of the supply shortage. 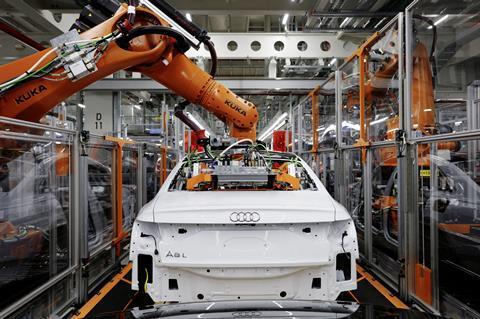 Audi A8 production in Neckarsulm

“The currently highly volatile supply situation continues,” said a spokesperson for Audi’s production and logistics. “We therefore needed to adapt to further production adjustments at our plants. For the month of June, we have registered short-time work for approximately 10,000 employees at the German sites. This does not mean that all of them will be in affected by short-time work for 100 percent of the time [but we will] adapt our shifts according to the current supply situation.”

At the same time the carmaker said it was working around the clock to minimise the impact of the global semiconductor shortage on its production.

“As things currently stand, we expect the supply situation to remain challenging over the coming months,” Audi’s spokesperson told Automotive Logistics. “Depending on the supply situation, Audi will do everything in its power to make up for the production shortfall to the greatest possible extent over the course of the year. The main priority is to reduce the high order backlog.”

The automotive industry has around a 12% share in the overall semiconductor market and is in competition with consumer electronics, telecommunications and medical device markets, all of which is causing increased demand at the suppliers.

A spokesperson for the wider VW Group told Automotive Logistics earlier this year that the semiconductor supply bottleneck was causing significant disruption in global manufacturing and that the Group was reviewing production in Germany, and focusing on minimising the impact.

Carmakers and their component suppliers were trying to build a stronger dialogue with the semiconductor sector before Covid hit. That is because it is now obvious how intertwined the two industries have become, said Bettina Weiss, chief of staff and global smart mobility lead at electronics association, SEMI at last month’s Automotive Logistics and Supply Chain Europe Live conference.

“It became clear as the supply chains intertwined and became more interdependent that one needed to develop a much better understanding of the other,” said Weiss.

Back in January the VW Group said that several production sites had applied for short-time working. While VW Group has reported a 21% increase in vehicle deliveries in the first quarter of the year it admitted that the second quarter would be damaged by the chip shortage.

“The shortage of semiconductors throughout the industry is expected to have a more significant impact in the second quarter than before,” said Arno Antlitz, VW Group’s chief financial officer (CFO) earlier this month. “Nevertheless, we are confident regarding business development in the full year and have therefore raised our outlook.”

VW Group of America plans to stop production at the Puebla plant in Mexico for three weeks in June and July, according to recent report from Automotive News, cutting production of the Jetta, Tiguan and Taos models.

The shortage in semiconductors has led to a global vehicle production shortfall of 2m vehicles so far this year, according to figures from analyst IHS Markit. Of that figure 1.4m were lost in the first quarter of the year and as many as 700,000 were lost in the first two weeks of the second quarter, with all regions now being affected in equal measure.