In its first quarter results for 2021 VW Group has reported a 21.2% increase in global vehicle deliveries on the same period last year, reaching 2.4m passenger and commercial units. 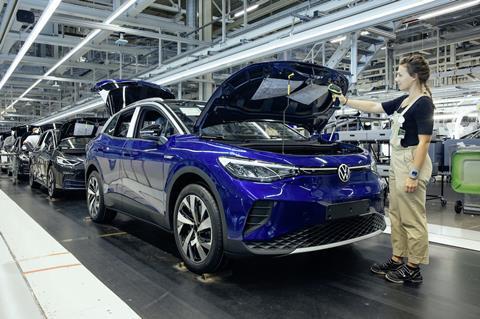 The VW ID.4 electric SUV in production at the Zwickau plant

The carmaker also reported that sales of electric vehicles (EVs) in Q1 doubled to 133,300. Production is up in the first quarter by 16.1% to more than 2,300 units. However, the bottleneck in semiconductor supply currently affecting the automotive industry worldwide is expected to hit second quarter results for the company.

One of the main drivers of the first quarter improvement was an increase in volume in China, which is VW Group’s largest single market and showed a 61.4% recovery against Q1 of last year, when Covid had already started to hit deliveries.

The carmaker said increased unit sales and an improved product mix had helped it achieve sales revenue of €62.4 billion ($75.8 billion), up 13.3%, and its operating profit stood at €4.8 billion “despite Covid-19 and [the] slight impact from semiconductor shortages”.

“We managed the effects of Covid-19 and the semiconductor shortages responsibly, continued to invest in the electrification and digitalisation of our vehicles, and simultaneously worked on our cost base,” said Arno Antlitz, VW Group’s chief financial officer (CFO). “The shortage of semiconductors throughout the industry is expected to have a more significant impact in the second quarter than before. Nevertheless, we are confident regarding business development in the full year and have therefore raised our outlook.”

The ongoing shortage in the supply of semiconductors to the automotive industry forced VW to shut several of its production sites in Germany earlier this year and the carmaker was reported to be looking for partial compensation from its suppliers, including Bosch and Continental, to offset the additional costs resulting from the disruption.

The shortage in semiconductors has led to a global vehicle production shortfall of 2m vehicles so far this year, according to figures from analyst IHS Markit. Of that figure 1.4m were lost in the first quarter of the year and as many as 700,000 were lost in the first two weeks of the second quarter, with all regions now being affected in equal measure.

During its Q1 earnings call, held on May 6, VW Group’s CEO Herbert Diess, said the carmaker had managed the global semiconductor supply shortage so far by prioritising and shifting capacities.

“Our taskforce fought for every single car to ensure we are getting the necessary semiconductors,” said Diess on the call, but he admitted that the semiconductor shortage would substantially burden earnings in the second quarter. He added that the company would do everything it could to offset losses occurred in Q2 in the second half of the year.

“We manage the general shortage of the semiconductors quite well but the incidents in the US and in Japan will hurt us, definitely,” said Diess. He was referring to the winter storms that hit semiconductor manufacturing in Texas in February and the fire at the Renesas Electronics’ plant in Hitachinaka, Japan in March, both of which have badly exacerbated the global shortage in microchips.

Danny Auerswald, plant manager at Volkswagen’s Transparent Factory in Dresden, which only makes VW EVs, said in last week’s Automotive Manufacturing Solutions Livestream: “We already can feel the impact but so far it’s going quite okay, especially when our sub-suppliers allocate their material accordingly in order to give way for the EV cars. At the moment, regular combustion cars are suffering way more.”

At this year’s Automotive Logistics and Supply Chain Europe Live conference, experts in the field of semiconductor production and supply looked at the disruption being caused to the automotive industry but also pointed to signs that the current crisis could lead to new forms of partnership between the two industries.

Diess pointed out that the carmaker expects to deliver 1m EVs (both BEV and PHEV) in 2021, putting it on target to meet its carbon emission targets for products.

VW introduced the ID.4 to China and the US in the first quarter (the ID.4 is being made in Germany at the Zwickau plant, but will also be produced at the Chattanooga plant from 2022). This year the VW Group will introduce the ID.4 GTX, the ID.5, the ID.6, Skoda’s Enyaq iV, the Audi Q4 e-tron, Porsche Taycan Cross Turismo and the Cupra Born, all of which are pure EVs.

In Germany the carmaker is moving those vehicles with a greater emphasis on cleaner transport to marry product sustainability with the transport used to deliver it. This year VW is switching all of the material, parts and vehicles it moves in Germany with state-run rail provider Deutsche Bahn (DB) to ‘green electricity’, name by means of power generated by wind farms and hydropower plants.