BMW is using trucks fuelled by liquified natural gas (LNG) to deliver engines to its assembly plant in Regensburg, Germany, cutting carbon and nitrogen emissions. The use of the trucks is part of the vehicle maker’s sustainability target of making all of the cargo transport for its operations carbon neutral by 2050.

Using the trucks means carbon dioxide (CO2) emissions on the route are cut by up to a quarter compared to conventional diesel engines, while nitrogen oxide emissions (NOx) are reduced by up to 60%, says BMW. 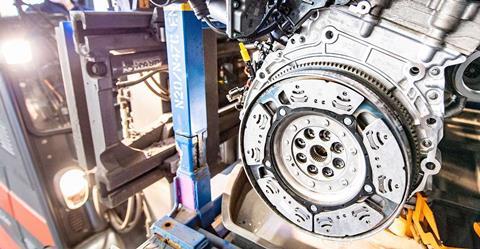 The engines are produced at BMW’s plant in the Austrian town of Steyr, its largest engine plant worldwide. According to BMW the trucks can make the return 1,060km (659 mile) journey between Steyr and Regensburg on one tank of LNG. BMW said the trucks perform particularly well on longer routes, with a range of up to 1,500km. In comparison, a truck powered by compressed natural gas (CNG) only has a range of 500km and a purely electric heavy goods vehicle would need several charges to make the round trip.

“Natural gas loses volume during the liquefaction process,” explained Axel Wauthier, logistics manager at BMW Group. “Before it is put in the tank, the gas is cooled down to minus 160 degrees. This reduces the volume to a six-hundredth of its original state. The fuel is then transformed back to the gaseous state before being injected into the engine.”

BMW said the LNG trucks were one of number of initiatives it was using to improve sustainability.

“Our approach is open to different technologies,” said BMW Group innovation expert Benedikt Anderhofstadt. “The company is not only involved in hydrogen pilots [such as] the H2Haul European research project, it also uses environmentally friendly carriers like trains. Already, almost 50% of new vehicles leave the BMW Group’s production plants by rail.”

H2Haul is an EU-funded project that aims to deploy 16 zero-emission fuel cell trucks at four sites. The project began in 2019 and will run for five years.

Rival Audi has also introduced LNG-powered trucks to its fleet to decarbonise the inbound logistics to its Neckarsulm plant, while VW is looking at CNG trucks for shorter routes in Mexico.