Parts supplier Continental is developing its own automated guided vehicle (AGV) for the movement of heavy parts in its production facilities. Autonomous AGVs are currently being trialled at plants in Zvolen (Slovakia) and Frankfurt am Main (Germany), and moving material for brake production. They can carry loads of more than a ton. 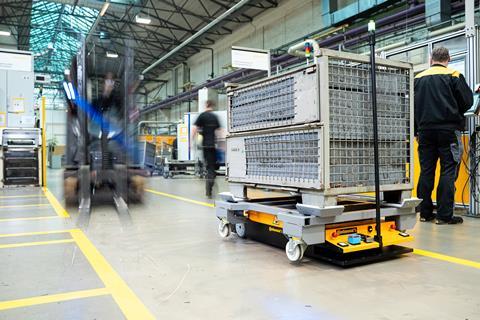 The application of autonomous robots for parts movements in the car sector is increasing, with examples such as BMW’s smart transport robot iw.hub and those being used at Skoda’s plant in Vrachlabí. However, Continental’s Alexander Schmitt, head of the actuation and future products in the Hydraulic Brake Systems unit, said the company had failed to find any autonomous transport vehicles on the market that met the company’s requirements, so it designed and produced its own by drawing on experience from the automotive sector

“We decided to use the aAGV [autonomous AGV] for heavy loads to develop a solution that helps us to shape our processes more flexibly and efficiently,” said Schmitt. “With our own expertise combined with competent partner technologies, we’re developing an industrial solution that optimises our production sequences and is also an attractive business idea.”

Sensors technology from the passenger car sector were combined with control technology, mechatronics and conventional mechanical engineering, according to the company, and only the electric drivetrain and the software for controlling the vehicle were based on the technologies available on the market.

Continental said the aim was for the aAGV to be available worldwide as a basic technology for use in production at Continental and later as a system that could be offered outside the company.

That is also something BMW is doing with the formation of its Idealworks subsidiary, which aims at supplying autonomous robots to the logistics sector.

Continental recognised that AGVs were playing more of an important role in the material flow in the digitised factory: “They reduce manual activities such as driving forklift trucks, speeding up transport, making it clear exactly what goods are available and where at all times, and making processes more predictable in general,” it said in a statement.