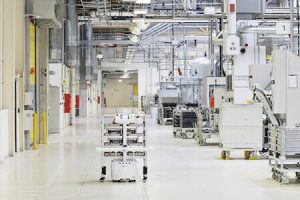 Škoda Auto is deploying a fully autonomous transport robot from this month to move parts around its component plant in Vrchlabí in the Czech Republic. Use of the robot is part of the carmaker’s digitalisation of production processes under its 2025 Strategy, which embraces industry 4.0 technology.

According to the VW-owned carmaker, the robot, which has been supplied by Japanese electronics company Omron, does not require lane guidance and can learn to move between stations by being taken through the route once via tablet or joystick. Using sensors and laser scanners, it recognises vehicles and stationary obstacles as well as people crossing its path.

“Unlike other systems used at Škoda Auto, it immediately adjusts its route based on information from its surroundings, without having to stop in the process,” said the OEM in a statement.

The robot changes routes permanently around any regular obstacles and can travel to all production destinations at the Vrchlabí plant, which covers 16,000 sq.m. It carries out 120 trips a day, travelling 35km on its route between the measuring centre at the plant and parts processing machines.

“With it, we’re once again highlighting the plant’s key significance as an ultra-modern high-tech location,” said Škoda Auto board member for production and logistics, Michael Oeljeklaus. “With the new transport system, we are continuing to introduce technological innovations at our plants in keeping with industry 4.0.”

The company said it was systematically turning to industry 4.0 technology in its production at Vrchlabí, specifically in the production of direct-shift transmissions and the insertion of gear actuator pistons. That includes the supply of dozens of parts and the return of empty containers to the warehouse.