In switching its Zwickau and Dresden plants in Germany to the production of exclusively electric vehicles based on the MEB platform, Volkswagen is outsourcing a higher share of the assembly of large parts of the vehicle to nearby suppliers than it previously had with ICE-based platforms. 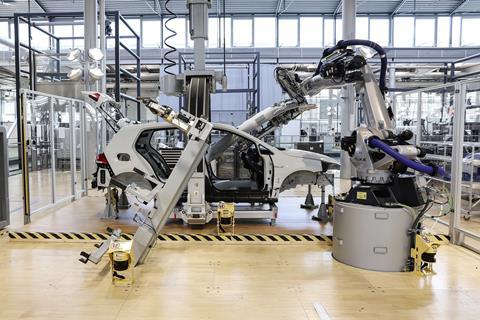 A VW e-Golf being assembled at the Dresden Transparent Factory

Discussing the switch to EV manufacturing at the recent Automotive Logistics and Supply Chain Live conference, Danny Auerswald, plant manager for the ‘Transparent Factory’ in Dresden, in eastern Germany, said that switching to the ID.3 when the e-Golf is retired at the end of the year will make the production itself a lot easier, as well as allow for some streamlining of the supply chain.

Dresden was the first Volkswagen plant to produce only electric vehicles when in 2017 it began producing the e-Golf, an electric variant of the ICE model. However, launching ID.3 output – which Volkswagen is preparing for at Dresden whilst operating on two shifts – will be a significant change for the plant, which produces around 16,000 vehicles per year. Volkswagen has already transformed the Zwickau plant to produce only cars based on the VW Group’s MEB electric vehicle platform.

According to Auerswald, producing the e-Golf necessitated a number of compromises and even disadvantages in the assembly process that led to higher costs and inefficiencies, such as how battery cells are fitted into the vehicle. Since the ID.3 was developed from the start as an EV, it simplifies many manufacturing processes; for example, engineers have designed an easy-to-fit ‘chocolate bar’ battery shape and considered existing manufacturing equipment more carefully.

Being an EV, the ID.3 also has fewer components than conventional cars. Auerswald said this in itself makes the parts handling and in-house logistics a lot simpler. However, he also revealed a change in philosophy.

“I think the strategy across the board is that we think more about modules. Instead of having everything assembled in-house, in the plant, you try to reduce the complexity and outsource the module assembly… For instance, the whole front end is coming pre-assembled,” he said.

View the full video here of the interview with Danny Auerswald from Automotive Logistics and Supply Chain Live.

Although this new strategy serves partly to reduce costs, Auerswald added that it fits into a wider drive to reduce the environmental impact of the production process and supply chain, with Volkswagen sourcing its components and sub-assemblies from suppliers closer to the assembly plant.

“In the past, I think everyone in the industry sourced from very far distances and was only interested in the so-called ‘A-price’ [the cost of part or component before other considerations],” said Auerswald. “But now, I think the cost of transportation and the CO2 emissions that are emitted… are more and more in focus and you also have to put a price tag on this. That’s why this whole module strategy also needs to be considered.” 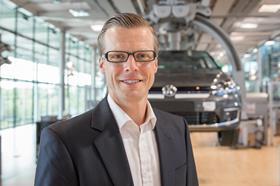 Danny Auerswald, plant manager for the Transparent Factory in Dresden

To help with reducing the emissions of the entire supply chain, VW also announced recently that it will use substantially more rail for outbound logistics and require German rail provider Deutsche Bahn to switch to green electricity. Auerswald added that VW is aiming for its factories to be carbon neutral. The Dresden plant already is, although the carmaker compensates for some emissions using certificates, including for the delivery of the cars to the customer.