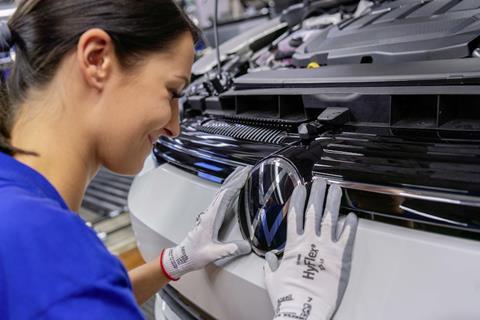 Volkswagen lineside workers have been instrumental in reducing the time it takes to assemble a Golf by one hour.

In the preparation stage for production of the best-selling model’s eighth generation, around 700 work steps were analysed at more than 400 workshops to draw on existing efficiency reserves, the company said. The result saw “numerous process improvements” implemented for more efficient assembly at the Wolfsburg plant in northern Germany.

There is also the promise of more time savings to come. From next year, a new fully automated generation of driverless transport systems will ensure a faster supply of material, which the German OEM says is a key factor in efficient factory processes.

The company expects body shop logistics will see a 7% improvement in productivity through use of 23 transport robots.

Starting with delivery of the steel sheet, the Golf travels 69 kilometres on production lines until the finished vehicle leaves the factory.

“The Golf 8 is much more complex than its predecessor. Nevertheless, we have cut average manufacturing time by about one hour,” said Andreas Tostmann, Volkswagen brand board member for production. “Production processes have become more efficient overall.”

Referring to the MQB modular transverse toolkit, he also said: “Because the Golf 8 belongs to the second-generation of MQB products, we achieved a significant reduction in production investments.”

Some 80% of existing body shop plant and equipment can be used for the Golf 8. Thanks to greater standardisation of plant and processes, ramp-up investments for a successful start of Golf 8 production have been cut by more than half compared with the model’s predecessor. Total investments for the new Golf are in the mid three-digit million euro range.

More than 35m Golfs have been produced worldwide to date, 26m at Wolfsburg. The first vehicles of the latest version will be in German and Austrian showrooms from early December.