Working together to drive out disruption

In the context of testing trade relations and new technology in supply chains, finished vehicle logistics providers need to work out how to position themselves for the future, delegates heard at April’s FVL North America conference in Huntington Beach, California 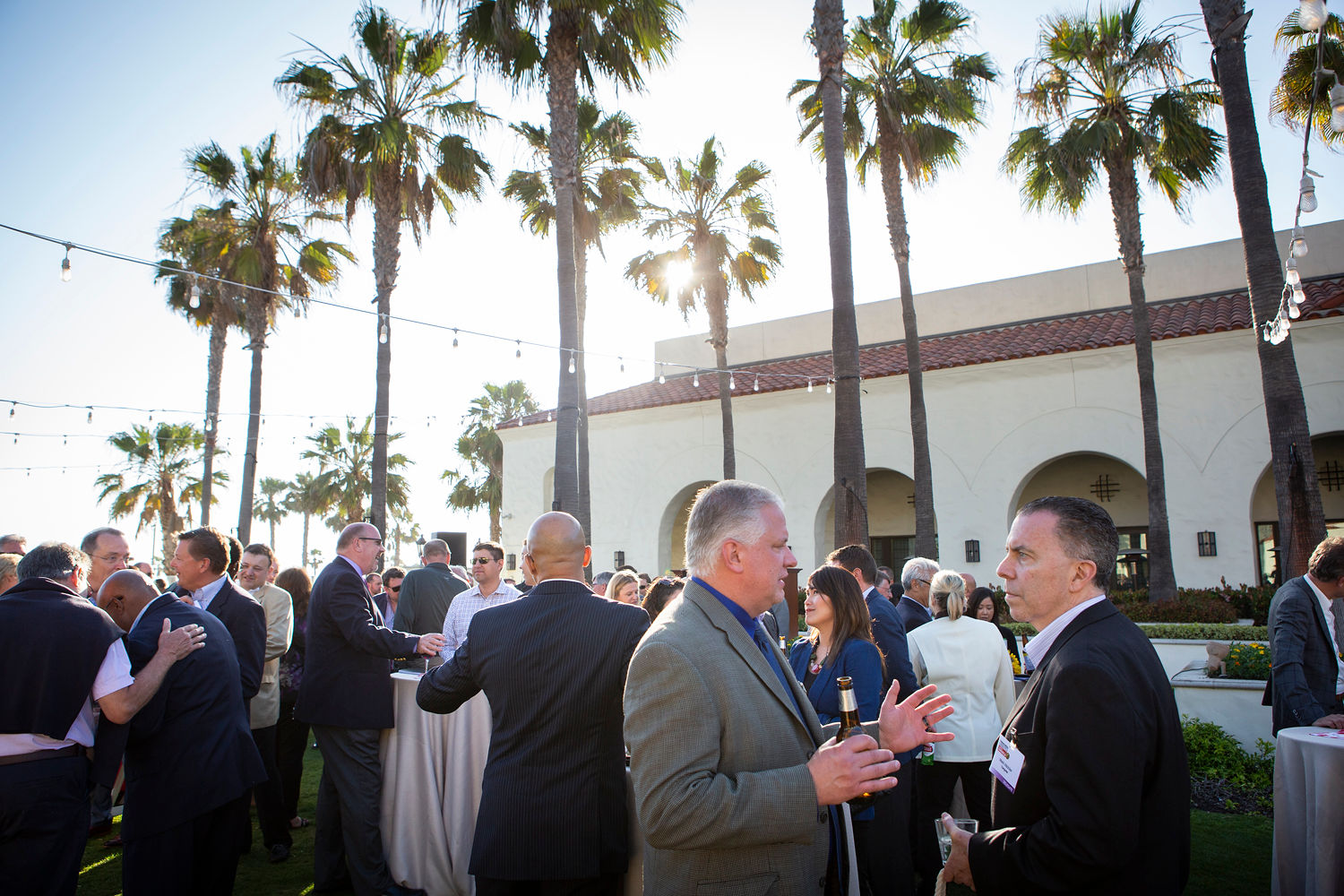 The last decade of vehicle logistics in North America has been marked by disruption. Autonomous vehicle technology, the threat of Chinese carmakers entering the US market, the impact of ridesharing, as well as the changes to purchase and delivery processes, all have increased the need for the industry to remain agile.

In terms of the US market, Michael Robinet, executive director, IHS Markit Automotive, explained that while “major shippers” including Toyota, Hyundai and Volkswagen were driving export volume, from now until 2026 the market is likely to see a decline in sales and will at best remain flat. Robinet went on to warn that current strong volumes were masking critical secular changes and that a plateauing market increased risk.

Nonetheless, he said that consumer confidence was relatively high amid “trade turbulence”, referring to the recent tariff wars between the US and its trading partners, especially China.

Judging by low fuel prices, historically low unemployment and a high rating on the consumer expectations index, George Peterson, president of analyst firm Auto Pacific said that the national economy was currently looking “very rosy” but that the outlook for the automotive industry was uncertain in light of changes to demographics, vehicle technology and market structure, including the “frightening extent” as to which nameplates were proliferating. 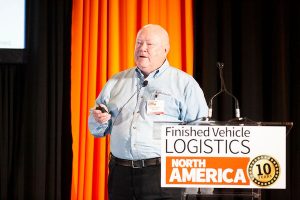 Regarding electrification, Robinet said that the trend was already affecting the supply chain. Manufacturers have been modifying existing powertrains rather than launching new engine families, and putting an increasing amount of resources into electrification. Most engine platforms now in development were “multi-energy”, he said.

“Electric vehicles will become more commonplace,” said Peterson, adding that despite an overall decline in industry volume, sales of electric vehicles are forecast to “grow dramatically, especially as mild hybrids make a comeback”.

“Manufacturers continue to make hybrids even with regulations in question. Plug in hybrid sales are expected to grow while diesel flounder,” he said.

As for autonomous vehicles (AVs), Peterson said it was technologically possible for them to be on the roads in five years, but that there were a lot of obstacles standing in the way, such as existing infrastructure, regulations and costs.

Regarding the shift from sedans to SUVs and their crossover cousins, Peterson revealed that earlier this decade unstable fuel prices caused SUV sales to crash, but predicted that this is unlikely to happen again due to the slow rising of fuel prices. “Consumers change buying behaviour when fuel prices are unstable,” he said, adding that trucks will continue to gain market share at the expense of cars.

“Migration of trucks shows no signs of ending,” he said. “Especially in the high-volume, lower mid-size SUV category, there is little to no [economic] penalty for choosing an SUV over a sedan. Trucks are the name of the game for the foreseeable future.”

Changing terms of trade
Javier Quijano, senior manager international trade, EY, told delegates that “we have never seen so many trade disruptions at the same time”, adding that out of all industries automotive is the “most impacted”.

Regarding the ongoing investigation into whether automotive parts and vehicle imports can be said to threaten US security, Quijano pointed out that the Trump administration has until May 18 this year to determine whether further action will be required.

Quijano also highlighted the more drastic 301 duties on China, which focus on Chinese intellectual property violations. Although automotive parts are not specifically targeted, numerous products including DC motors, antennas and electronic integrated circuits are commonly used by the automotive sector.

He pointed out that China had countered the steel and aluminium tariffs imposed by the US with 125% duties on 128 items, amounting to $2.7billion worth, and said he believed the country was “set to challenge future tariffs or trade war sanctions from the US”. 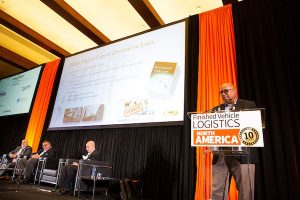 Suggesting ways of mitigating the impact of the China-US trade war, Quijano mentioned relocating available production to secondary non-China facilities, if available, as well as changing the location of manufacturing, but admitted this could take “years”.

Regarding the United States-Mexico-Canada agreement (USMCA), Quijano said the current status was that the US, Canada and Mexico were all “putting out roadblocks”. Quijano pointed out that both Mexico and Canada want to be exempt from the 232 steel and aluminium tariffs, suggesting the situation was at a standstill.

However, Mexico was due to vote on its labour provision this month, which would check off one of its commitments under the replacement deal for the North American Free Trade Agreement (Nafta). The labour regulation would completely overhaul the country’s existing union structure, which has long been criticised for failing to protect workers.

Charles Franklin, manager export logistics, American Honda, warned that if regulations became too restrictive, OEMs including Toyota and Honda, which have 44 and 20 plants outside Nafta countries respectively, would “produce elsewhere”.

New technological capabilities
Finished vehicle logistics has not always been the fastest to adapt to new technology, but the Internet of Things, vehicle connectivity, cloud systems and data analytics are helping to improve tracking and ETA, plus carrier and capacity management across the outbound supply chain.

Felitto highlighted the “four mega trends dominating the industry” as: mobility as a service; urbanisation, autonomy and connectivity; digital servicing and experience; and the green economy. He said digital solutions were reforming the car purchasing process as well as aftermarket service, and emphasised the importance of growing the latter for ride sharing companies. 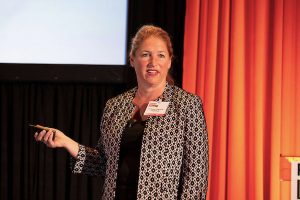 The company is developing track-and-trace capabilities to support the visibility needs of finished automotive logistics and is now testing passive and active RFID tags which offer a “brand new level of visibility” that can reveal where cars are parked, Felitto said.

Meanwhile, Christine Krathwohl, vice-president global business development, Freight Verify, suggested that the electronic logging device (ELD) mandate implemented in 2018 had “changed the world” because it provided the opportunity to use ELD and connected car technology together. She suggested that the velocity of technology is changing so much, “we haven’t caught up to it”.

Felitto added: “We need to use telematics in the car when in it’s in transport mode. This can track cars from birth to delivery, but we need to get over privacy rules first – it’s an important step forward for our industry.”

Pat Foran, director of operations, Hyundai Glovis told delegates that being able to locate inventory was “essential to successful vehicle processing and shipments”. The company is currently trialling an active RFID tag system at the vehicle processing plant at KIA Motors Manufacturing Georgia, with more than 1,700 tag devices.

Software company Cognosos has provided Hyundai Glovis with two ‘gateways’ or antennas which receive signals form the tracker tags. There are also several ‘activator beacons’ set at entrance points where cars pass, including the carwash, processing entrance and body shop.

Cognosos provided apps for employees to be able to search by VIN or stock number, which provides directions to reach the car needed. Foran told delegates: “We are about midway through our test period. So far, the results look promising.” 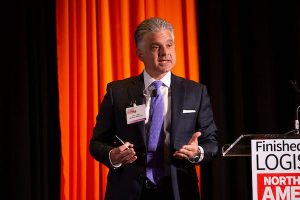 “The ‘Amazon economy’ is bypassing traditional B&M sales, with OEMs such as Tesla looking to cut out dealerships and channels such as Costco taking customer orders, soliciting fulfilment,” he revealed.

Kuehn went on to suggest that autonomous vehicles could reduce terminal and first and last mile costs, and even drive themselves off rail cars – although human intervention is still likely to be needed to secure the vehicle to the railcar. He also said that mobile apps could replace car keys, which would “simplify the control between parties in the supply chain”.

Outlining a reimagined supply chain, Kuehn said an OEM factory could push inventory through to the fulfilment centres, rail transport could have automated loading and unloading, and regional fulfilment centres could provide online ordering of the vehicle and then automated delivery to the customer.

Shortages of railcars and truck drivers
Kuehn described how, following the recession, railroads have lost market share to trucks and short sea from Mexico for finished vehicle transport. He explained that there were several reasons for this, including changing vehicle distribution patterns, increasing production in Mexico and railcar shortages. 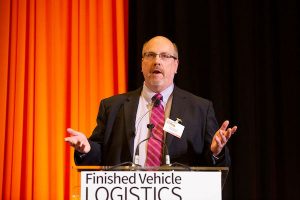 “Times have changed,” he said. “Rail needs to work hard to keep up. Rail doesn’t do door-to-door delivery and rail car shortages have been a problem in the last three years, since oil prices plunged.”

Kuehn argued that you “can’t swap bi- for tri-level [railcars] at a moment’s notice” and that there needs to be better flexibility to meet changing mix of sedans and SUVs.

In terms of transport and capacity management, Chuck Kendig, assistant vice-president – logistics, sales and production planning at Honda, suggested that the industry needs to “get smarter”, securing high quality capacity at a lower rate.

According to Guy Young, general manager Auto Haulers Association of America, the country’s shortage of trucks drivers remains the “biggest challenge to the industry”, revealing that it costs $125,000 dollars to train a driver in one year.

Ivan Hernandez, director NAFTA transportation, Daimler Trucks North America, explained that the company needs 1,100 drivers on its network, but that business growth was outsourcing driver supply. However, by developing new routes and ports, including short sea shipments, he said it was possible to improve conditions for drivers. Some of them could even “be home every day”.

Weathering the storm
OEMs including Honda and Volkswagen revealed some of the disruptions they have encountered, including Hurricane Sandy and vandalism, and how they dealt with them.

“We didn’t realise the impact of vandalism,” said Honda’s Franklin. “We produce 40,000 cars per year for export and we lost 639 cars in one month, which was over 700,000 dollars. We had to change our shipping plan immediately.” 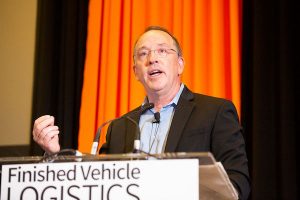 He added: “You have to collaborate. We didn’t have enough parts for 639 cars and so we negotiated with the port authorities and partnered with 3Pl providers.”

Jordan Kajifasz, assistant vice-president, sales and marketing, international intermodal and automotive, Canadian Pacific Railway, suggested that the industry needs more capacity to handle the cars being made. “An OEM won’t stop producing vehicles because CP had an issue with its network,” he pointed out.

The company is using the land it has to increase capacity and is working with Hyundai Glovis in Ontario, Canada, to create the space needed to run their business in their own facility.

Heather Gilhuly, senior manager of port operations and metrics, Volkswagen Group of America added: “Production doesn’t dip as much as demand – it doesn’t get turned off as quickly as shipping. “Every month we look at forecasting and have an offsite arrangement, which we utilise when we know we have cars that will sit there.”

During a decade of disruption, it has been hard to plan for uncertainty, but the finished vehicle industry needs to be prepared, now more than ever. “You can’t change something at the snap of a finger, so you need to always have contingency plans,” said EY’s Quijano.