Finnish contract manufacturer Valmet Automotive has begun making the new A-class for Mercedes-Benz at Uusikaupunki in Finland, the third plant to make the latest version. The move to include contract production at Valmet was first announced last year. 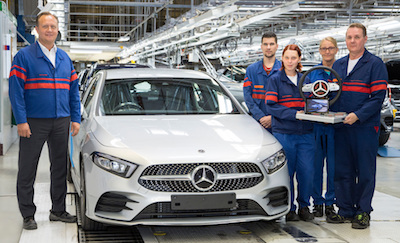 Production of the new A-class started in April at Mercedes-Benz’s plant in Rastatt in Germany. Its lead plant for the model was followed a month later by Kecskemét in Hungary.

For the new A-class to be made on the same assembly line as the GLC at Uusikaupunki, the German OEM said extensive conversion work was carried out in the body shop, paint shop and assembly areas.

“We have focused on preparations to secure a fast launch and a high-volume production run,” said Pasi Rannus, senior vice-president of manufacturing at Valmet. “We have also benefited from our experiences with the previous A-Class generation and the GLC.”

[mpu_ad] Markus Schäfer, production and supply chain member on Mercedes-Benz Cars’ divisional board, added: “Within a very short time, our production strategy has enabled us to master the third successful ramp-up of the new A-Class Mercedes-Benz.”

The previous version of the A-class was manufactured at the Finnish plant from 2013. The new-look A-class is the first model in the fourth generation of Mercedez-Benz’s compact cars.

As lead plant for production of compact cars, Rastatt also controls quality and supplier management on a global basis. It also supports smooth ramp-ups at the other plants, with services including employee training.