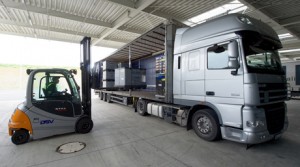 Following a six-month start up phase, Audi has officially inaugurated its new logistics centre at the Böllinger Höfe industrial park in Heilbronn, Germany. The 38,000 sq.m facility, which is processing inbound parts to Audi’s nearby Neckarsulm facility, is being managed by transport and logistics provider DSV Solutions.

Audi signed a contract estimated to be worth €30m ($38m) with DSV back in March for the supply chain management of inbound deliveries to the Neckarsulm plant.

The carmaker has also begun production of the Audi R8 at Böllinger Höfe. Assembly started on August 25th this year, three weeks after the last Audi R8 came off the production line at the Neckarsulm plant. The new facility is making 10 R8 models a day.

“With the commissioning of the Böllinger Höfe we are creating the necessary scope for further optimising the structures at the Neckarsulm site,” said Norbert Rank, chairman of the Works Council in Neckarsulm. “And we managed to bring together central areas of Quattro GmbH. We are also creating more jobs in our region.”

At the logistics facility DSV is receiving 160 trucks a day and unloading approximately 4,500 containers of parts for replenishment of inventory at the Neckarsulm plant. The plant is 6km away and makes the Audi A4, A5 Cabrio, A6, A7, A8. The operation at the logistics facility employs around 160 workers and is managed over three shifts.

The flow of inbound material, which was previously processed through five external facilities, is now being coordinated through one central location. According to Audi the result is a further reduction in shipments, and transfer of truck traffic from the Heilbronn urban area to the industrial park.

The company is also monitoring the delivery of parts from Heilbronn to Neckarsulm using a live tracking GPS system that enables schedules to be adjusted flexibly to the traffic situation and also optimises routing.

DSV had already been operating a consolidation centre for Audi in Heilbronn and 40 staff were transferred to the new facility from there in March this year, when Audi handed the facility over. Since then further logistics services have been added in stages.

“The stepwise transition and the start-up phase have been coordinated with Audi,” said Harald Schefft, managing director of DSV Solutions. “We have had an excellent collaboration with Audi at a detailed level, and we are very pleased that the implementation was successful.”

Earlier this year DSV has announced plans to double its revenue from the automotive sector  by 2020, which would account for 20% of its overall business

Meanwhile, Audi said it would be investing more than €22 billion ($27 billion) in its global operations through to 2018, with about half of that figure going to its German sites. The company stated that around €650m ($826m) per year will be invested in the Neckarsulm site.

The next edition of Automotive Logistics magazine will feature a detailed insight into Audi’s production system and supply chain strategy, with a focus on plant logistics at both the Neckarsulm and Ingolstadt facilities.

*In other news DSV has announced it has opened a new office in Curitiba, Brazil, its sixth office in the country since it began activities there in June 2012. Curitiba is Brazil's second largest car manufacturing location and considered by many to be the best location for investment in Brazil.

Jorgen Moller, CEO of DSV Air & Sea, commented: "Growth remains our clear focus in Brazil, but we will now strike the pause button with regards to new branches openings, and concentrate on growing our market share in the 6 cities where are present".