Automotive Logistics, in partnership with logistics provider RPM, recently published the findings of their second survey into the concerns of the global finished vehicle logistics sector. On the back of that, Nick Thompson, head of vehicle logistics for the North America region at carmaker Stellantis, and Bill Kerrigan, RPM’s chief business development officer, met to discuss the ongoing post-pandemic challenges to vehicle distribution and the closer working relationship carmakers now have with their logistics providers. 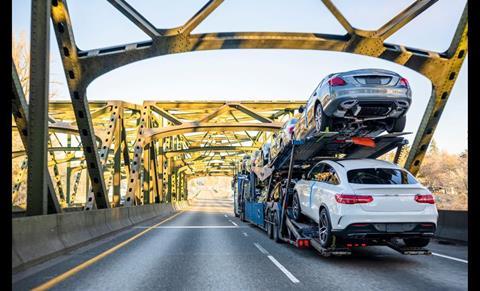 Two and a half years on from the start of the Covid crisis and carmakers are still playing catchup with prepandemic levels of production. The automotive supply chain continues to be disrupted by material and labour shortages, volatile output, capacity shortages and the worsening impacts of climate change.

According to Nick Thompson, disruption was instantaneous when the Covid pandemic first hit and continued to affect the automotive supply chain for the following year. While some of the main problems were dealt with through ingenuity and hard work, which has brought stability, the industry is still dealing with the aftermath and pockets of disruption continue to challenge those in charge of the supply chain.

Thompson said Stellantis was still dealing with component availability and delays in parts deliveries but it was handling those problems better thanks to the experience of its staff, with the result that production had become more stable.

Kerrigan agreed that OEMs were managing supply chain crises and maintaining production across North America. At the same time, he recognised that the US is again handling a lot of imported vehicle volumes, equal to between 4-5m a year.

”We do a lot of work at the ports, so that’s coming back also,” said Kerrigan. ”The whole supply chain is slowly but surely heading back to where it was.”

However, finished vehicle movements remain fraught, according to Thompson. ”From my perspective, [transport] capacity shortages would be the top on the list,” he said. ”I think as an industry, we’ve seen volumes lower than they’ve been historically and yet we’re still dealing with some of the capacity issues.”

That situation begs the question, how is the industry going to deal with the higher volumes aniticipated? ”To me, that’s a big concern and something my team works a lot on with our counterparts in Stellantis and other partners in the industry,” said Thompson.

Watch the full discussion between Nick Thompson and Bill Kerrigan in the Livestream webinar: What’s next for global outbound logistics

Global labour shortage
North America, however, is relatively well insulated from current issues affecting other regions, such as river freight failures because of drought in Europe and Asia. ”I think the volatility is more acute in China, Asia and Europe than it is in North America,” said Kerrigan. ”You’ve seen a lot of shutdowns in China. You’ve seen a lack of labour and shortage of energy in Europe.”

However, labour is still a critical issue in North America because the automotive industry lost a lot of good logistics professionals over the Covid lockdown.

”People took early retirement, whether they were truck drivers, or they worked on the railways,” noted Kerrigan. “To be able to replace those people has proven to be a challenge and will continue to prove to be a challenge for the near future.”

Thompson agreed that the problems now seem more localised. ”I think that is also regional, to some extent, where we have bigger issues in certain areas of North America and and no issues in other places,” he said. ”As people get more used to the new way of doing things, we’ll see that improved, but it is something that we’re working on regularly now and a big focus for us, both of those issues of labour and capacity.”

Communicating on capacity
For Stellantis, internal and partner communication became more important during the pandemic disruption and is now an essential tool in managing capacity.

”That started back when Covid first hit and everyone was dealing with the situation,” he said. ”States closed down and  dealerships closed down. It led to an increased need for communication on how the market was working. We’ve continued to grow on that over the last couple of years.”

Stellantis continues to work with its partners in sharing as much information as possible, whether through annual volumes or monthly meetings.

However, closer collaboration between carmakers and their logistics providers still needs improving, according to Kerrigan. ”We’ve been talking about collaboration for a long time but there are a couple of things that make it difficult – one is antitrust,” he says, adding that carmakers cannot share the finer details of their marketing plans with partners.

Another obstacle is the ability to make sense of all of the granular information gathered from the vehicle distribution business. While the technology exists to gather data, the tools for analysing it usefully are still being developed and there remains a shortage of professionals to execute that anaysis.

”We’re working diligently on automating a lot of this [using AI],” says Kerrigan. “When we get to the point that we are able to show the OEMs that there are savings to be made and we can help them on that, that’s going to be the crossroads.”

Post-Covid collaboration
While acknowledging the obstacles in sharing information, Thompson said Stellantis was working together with its partners more than ever and that communication and collaboration had been more prolific since the Covid crisis than it had been over the last decade he had been involved in vehicle logistics.

”I’ve seen their collaboration grow leaps and bounds over the last couple of years,” he observed. ”Stellantis [has been] working with the railroads, along with the other OEMs, on some of the challenges.”

”Where we can where we’re trying to share and we are going to continue to communicate,” said Thompson. That includes sharing volume forecasts so logistics partners can plan their operations accordingly. He also said Stellantis would share information on vehicle electrification and standardisation on charging operations.

”Collaboration is improving, it’s improved over the last couple of years, and it will continue to improve,” said Thompson. “We just need to find the right areas to work on.”