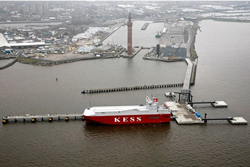 Last week saw the official opening of the Grimsby River Terminal, which will provide ro-ro services to a large number of OEMs and is already being touted as the most significant economic boost for Grimsby in over 100 years.

GBA, which provides end-to-end finished vehicle logistics solutions, worked together with Associated British Ports (ABP) and Graham Construction to ensure the port was completed two months ahead of schedule. It began its operations in July of this year.

Grimsby has remained one of the UK's major shipping hubs for well over 150 years; even before the opening of the new terminal, it handled 400,000 ro-ro units per year. This, combined with the figures from nearby Immingham, raised the total number of units moved each year to 600,000. Combined, the two ports handle more than 50 million tonnes of diverse cargoes a year, meaning that it handles close to 10% of Britain's total seabourne trade.

The project received an investment of £26m ($42m), the largest single investment since the port's Royal Lock opened in 1852. As much as 300,000 tonnes of material was dredged from the river and the opening marked the completion of 270,000 hours of labour over a course of 15 months, which meant the terminal was completed in record time and ahead of its original completion date between October or November.

The Humber's southern bank has long been a prime marine gateway, comprising as it does the ports of Grimsby, Immingham and Killingholme. Together, these latter two facilities last year handled over 800,000 vehicles, from OEMs as diverse as Audi, Skoda, Sayer, Seat, Suzuki, Mercedes-Benz, GM and Mini.

This year, the port of Grimsby will deliver its 3 millionth car for Volkswagen. Robin Woolcock, former managing director of VW in the UK, was present as guest of honour and carried out the terminal's official opening. He cited the commencement of VW operations in this country back in 1975, when around 4m vehicles were shipped to the UK.

Grimsby can now accommodate ocean car carriers with 3,000 unit capacity, something that will markedly improve the speed and efficiency of transporting high numbers of finished vehicles. Woolcock, who served in his prior position for 12 years, cited the challenges faced over the past 10-15 years, when not having the facilities or the space to bring the biggest car carriers into the port was becoming a real issue, and was beginning to damage the market for VW in the UK.

ABP's port director for Grimsby and Immingham, John Fitzgerald, said that the shared desires of all parties involved to create a "world-class marine facility" had ensured the project's success. He mentioned that the decision to commence new operations was taken in a time of recession but that a "long, strategic view" had proved the correct course of action.

Graham Construction's managing director Alan Bill also spoke of the "complex fast-flowing river environment" which had posed challenges to the provider - the port's new floating concrete pontoon, for example, was created in Newcastle and floated into the dock.

Scott Smith, of Gefco, told Automotive Logistics about the increased flexibility the new port would bring, as before larger vessels could only call at Immingham. He claimed that this year alone Gefco would have provided 40,000 units to the newly-docked area. "It's a clean port and it's well-maintained," he said. "GBA are handling the vehicles well."

Berthing staff at the new terminal are to be ABP-sourced, with an overall Humber-based project staff. Killingholme and Immingham currently employ over 350 workers, and Grimsby's increased operations will mean large openings in the local job sector.

GBA's managing director, Sam Judah, paid tribute to the dedication and skill of his staff at the official opening of the terminal last week.

In four years of recession, he said, the teams at both Grimsby and the port of Immingham had pooled their resources to ensure the completion of the new terminal. He told Automotive Logistics that there was a comparatively "minute turnover of staff" which, he claimed "speaks for itself".

The new port would provide a "platform of growth" from which to increase and improve finished vehicle operations.

When asked about future projects within the GBA Group, Judah cited the potential for upcoming rail infrastructures to increase operations in Scotland, and the far South West. He said that these were areas which "need to be served" and that over the next decade such developments could be strategically implemented.