A stronger Nafta could emerge from negotiations 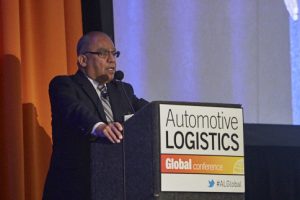 Despite US President Donald Trump's recent warning that he may pull the country out of the North American Free Trade Agreement (Nafta), Rogelio Landin of the US-Mexico Chamber of Commerce (pictured) continues to foresee a more positive outcome.

Speaking at this year's Automotive Logistics Global Conference in Detroit, Landin, who has just joined as executive director for the Detroit chapter of the chamber, told delegates there was an element of déjà vu taking place when comparing the current talks underway and the original talks in the 1990s.

During his presidential election campaign last year, Trump took aim at the country’s multilateral trade deals, including Nafta and the Trans Pacific Partnership (TPP), saying he would renegotiate or cancel them, once in power.

In January, Trump officially withdrew from the TPP and in May, US trade representative, Robert Lighthizer, notified Congress of the administration’s intention to renegotiate Nafta, officially kicking off the process of reworking the two decade-plus old pact.

Speaking after the first round of talks about the two-decade-plus accord that many carmakers’ supply chains currently rely on, Trump said he did not think a satisfactory deal could be negotiated and that the US would ‘probably’ withdraw from it. A second round of talks has not completely removed that doubt.

However, Landin said he believed that next year's election in Mexico, a country where presidents only serve single six year terms, meant that an inevitable change in administration at that point meant the negotiations were unlikely to result in any firm changes until a new leadership came in.

He said this meant an opportunity existed for all parties to properly assess the existing agreement, update it and strengthen it.

“The good news is that in the interim we have plenty of opportunity to revisit Nafta, assess it, evaluate it, seek out where improvements can be made and expanded to include critical elements to trade, like technology and security, which were essentially non-existent issues when the original was drafted.”

Kevin Hogan, executive director at Ernst & Young said his firm had also previously stated it did not see any major changes to Nafta, while also echoing Landin's forecast that the agreement could be strengthened.

“Stranger things have definitely happened, but that is not what we are betting on because, at the end of the day, there is so much entrenched interest, not just in our industry but in so many industries, that a lot of the rhetoric that may be going around right now is going to meet with an economic reality, and our belief is that economic reality will sway decision making.”

Landin also explained the importance of Mexico within the mix, the partner most targeted by Trump given the large trade deficit that the US has with the country.

“Today Nafta is exponentially so much more than a continental agreement. It is by extension a hemispheric agreement with Mexico serving as the gateway to every trading block in South America and beyond.”

“I foresee that once somebody sits down and does the numbers, we'll recognise the value, and not only retain what we have as the present infrastructure of Nafta but build on it, improve it, expand it and add to it,” said Landin.

Also at the conference, Gary Allen, vice-president of supply chain excellence at transport and logistics company Ryder said that while he also did not think there would be much change to Nafta, Ryder would retain a significant prescence in Mexico for the foreseeble future either way.

“Our domestic Mexican operations, a lot of our business down there is driven from US-based companies, but we also have a lot of domestic business, so for us if there are changes we are still going to invest in Mexico; it may just shift from cross-border to intra-Mexico,” said Allen.

Earlier on the same day of the conference Brandon Mason, automotive director and mobility leader at analyst firm PwC, revealed a growing light vehicle assembly outlook for the entire Nafta region, including the US, which is sixth in terms of capacity growth in coming years.

“What we don't have in there is the recently announced Toyota-Mazda joint venture plant here in the US,” he said. “So if you add another 300,000 units to that, it actually catapults the US all the way up to number three,” said Mason.

“So for all the concern of where is assembly going in the region and sales fluctuations, the assembly outlook for the US and certainly for the region is quite strong.”

The US imported over 8m new vehicles last year, with about half of those vehicles coming in from Mexico and Canada at about 2m cars each.