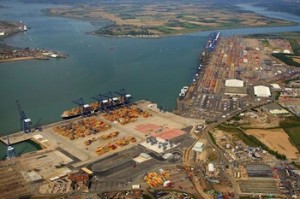 The UK government needs to respond with a “bold, ambitious and visionary” ports policy in the wake of the country’s vote to leave the European Union (EU), the nation’s biggest port operator has warned.

Speaking to members of Parliament last week, ABP chief executive James Cooper said the government must now look to the long term in its approach and focus on the opportunities as well as the challenges. “What we must avoid is a timid response based on a perception that this is mostly about ‘damage limitation’,” he said.

Excluding the UK from the EU Ports Services Regulation would be central to that response, he added.

The controversial vote to leave the EU has elicited both positive and negative responses from the UK’s automotive and logistics sectors but the faltering Conservative government has fuelled uncertainty, something Cooper seemed to eager to end.

“Brexit will bring new challenges, for sure,” he said. “Investment decisions will be paused while people get their bearings and some may end up being cancelled. But Brexit will also bring new opportunities. And one major exporter has already urged us to ‘get on with it’ and begin pouring concrete to provide the facilities to handle their sky-rocketing exports, a challenge I know we will respond to positively.”

The EU Ports Services Regulation is aimed at making European ports more competitive and increasing financial transparency. However, it has been widely criticised across the ports sector in the UK. Bodies such as UK Major Ports Group (UKMPG) and the British Ports Association (BPA) acknowledge that the bill aims to regulate market access to port services, port charges and financial transparency. However, they fear that the regulation could lead to more unfair competition and force private ports to put their services out to tender.

“We believe the regulation could have serious negative consequences for job creation and investment in the EU port sector,” said the UKMPG in a recent statement.

Cooper added his voice to the criticism of the regulation and said the ports industry, unions and employers were united in their opposition to it, referring to the regulation as a set of “ill-conceived, one-size-fits-all proposals”.

“We know what the Commission’s ultimate aim is because they have been kind enough to publish it and, in the UK, with its large number of relatively small, highly competitive ports, it will mean more aversion to risk and less investment,” said Cooper. “How this is in the UK’s interest has always been beyond my comprehension.”

Cooper went on to say that excluding the UK from the regulation would be a key test of the government’s success in the Brexit negotiations ahead.

The comments advance ABP’s previously cautious response to the Brexit vote. Initially the group said it was too early to judge exactly what the implications of the vote might be.