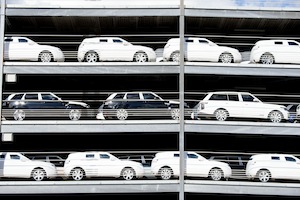 Associated British Ports (ABP) is investing £50m ($66m) in its vehicle handling facilities at the port of Southampton.

The investment will be applied in two phases beginning with a two new multi-story vehicle handling facilities that together will be able to store 7,600 vehicles on route to export markets.

The second part of the investment will add another two facilities and taken together the port of Southampton will add 15,000 spaces to its vehicle storage capacity. It will take the total storage capacity at the port to 55,000 across nine vehicle handling facilities.

The latest investment adds to the £32m ABP has already invested in port of Southampton over the past five years to support vehicle exports, including in a new link span for stern ramp ro-ro vessels and $1.2m in an upgrade to its eastern dock rail infrastructure.

The port of Southampton is the UK’s busiest vehicle handling port and ranks number six in the busiest European vehicle handling ports. It processed 915,000 vehicles last year, a 9% increase on 2014. That included 520,000 for export. The port expects that figure to rise by between 9-10% again in 2016. Major carmakers using the port include BMW, Ford, Jaguar Land Rover and Honda.

“Southampton is the UK’s number one port for exports, handling exports worth some £40 billion, and it is the UK’s number one for vehicle exports,” said ABP chief executive, James Cooper. “The port is a critical part of the supply chain for the British automotive industry, providing essential access to global markets. Our investment will build on this critical role and support our customers’ drive to continue to grow their exports well into the future.”

Infrastructure for vehicle storage, and its maintenance, is becoming a priority for operators in the UK, where vehicles sales beat 2.6m units for the first time last year, the fourth year of consecutive growth according to data from the Society of Motor Manufacturers and Traders (SMMT). Export trade accounts for 77% of the UK’s output, which reached 1.5m last year. Europe now accounts for 57.5% of all UK exports and there has also been a rise of 26.5% in the US, making it the UK’s biggest export market outside Europe and overtaking China.

Last month Honda’s division in the UK started exports of the new generation Civic hatchback from its plant in Swindon to the US via the port of Southampton. It will start selling the model in Canada from this autumn.