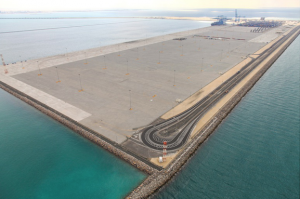 Abu Dhabi Ports, the port management company operating in the United Arab Emirates (UAE), has reported a significant rise in cargo handling for the first ten months of this year, including an almost 30% rise in ro-ro traffic, along with a 36% rise in container handling.

Earlier this year the company moved all ro-ro operations from Zayed Port to Khalifa Port to meet the growing demand from the automotive sector in the UAE.

This resulted in more than 110,830 vehicles being moved in the first ten months of this year, up from 85,835 vehicles for the same period last year. Currently, Khalifa Port offers an annual capacity of about 350,000 vehicles. Enhanced yard and terminal facilities have increased customer services and provided a strategic location with flexible capacity, according to the port.

As well as being able to handle greater volumes of automotive traffic, Khalifa port is able to accommodate four of the largest ro-ro vessels at a time, double the number that Zayed port could handle, significantly boosting turnaround times.

In terms of container volumes the Khalifa Port Container Terminal moved 1,204,993 TEU containers, up from 889,165 in the same period in 2014. The busiest single month in this year was October, when the port handled 157,673 TEUs.

“Our double digit growth in all three cargo sectors, especially the top performance at our flagship Khalifa Port, has a special significance on the backdrop of a slowdown in the global maritime industry,” said captain Mohamed Juma Al Shamisi, CEO of Abu Dhabi Ports. “Our growth is set to continue throughout this year.”