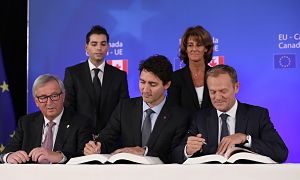 The European Automobile Manufacturers Association (ACEA) has backed comments by Germany’s automotive trade body earlier this week that the recently-signed EU-Canada free trade agreement could result in an increase in European vehicle exports to the North American country.

The Comprehensive Economic and Trade Agreement (Ceta) was finally sorted out this week when Canada’s Prime Minister, Justin Trudeau, made the flight to Brussels to sign the 1,600-page treaty, along with the president of the European Commission, Jean-Claude Juncker, and EU Council president, Donald Tusk.

Once in place, it will eliminate 98% of the tariffs between Canada and the EU and officials hope it will increase trade between the two by over $12 billion a year.

The automotive industry is one of the key sectors targeted by the agreement and ACEA says existing strong trade may continue.

Currently the EU and Canada both levy tariffs on their automobile imports. Canada’s MFN (most favoured nation) import duties for all automobile products are 6.1%, while EU tariffs for passenger cars and commercial vehicles are 10% and 22% respectively.

EU manufacturers exported 139,000 motor vehicles to Canada in 2015, while imports from Canada amounted to 7,700 units.

“ACEA welcomes the parallel and progressive dismantling of these tariffs over a period of five to seven years as a result of Ceta,” a spokesman told Automotive Logistics.

In addition to the removal of tariffs, regulatory divergence has also created additional costs for automobile manufacturers in the past.

“As a result of Ceta, Canada will unilaterally accept some UN Regulations, which is a symbolic gesture that ACEA welcomes,” said the spokesman.

Earlier this week, Matthias Wissmann, president of the German automotive association, the VDA, was equally optimistic about the potential for increased trade, while stressing that Europe also needed to conclude its similar TTIP deal with the US.

ACEA has pointed out that international trade is an “important pillar” of the European automobile industry, generating a trade surplus of €100 billion ($110 billion) in 2015.

Both ACEA and the VDA have also welcomed Ceta as an important step in the broader context of EU trade policy. “It has reiterated the bloc’s ability to successfully negotiate and conclude trade agreements,” said the ACEA spokesman.