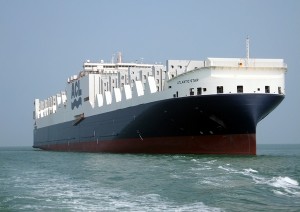 Atlantic Container Line (ACL) will deploy the first of its new G4 fleet in December on a transatlantic service. The Atlantic Star is the first of five con-ro vessels the Grimaldi-owned company has on order from Hudong-Zhonghua Shipbuilding in  China and is reported to be the largest con-ro vessel built. ACL took delivery of the vessel at the end of October and it is being registered in the UK and christened in Liverpool following its journey from China.

According to ACL container capacity is more than doubled at 3,800 TEUs, plus there is 28,900 sq.m of ro-ro space and a car capacity of 1,300+ vehicles. The ro-ro ramps are wider and shallower and the ro-ro decks are higher (up to 7.4 metres) with fewer columns, enabling much easier loading and discharge of oversized cargo.

The company said emissions per TEU have been reduced by 65%.

In a statement the company said that the G4 vessels will dramatically improve ACL's competitiveness on the North Atlantic trade.

“The new G4 fleet will enhance our cargo carrying capabilities, and combined with Grimaldi's ever-expanding service network, they will enable ACL to provide even more services as a high quality container and ro-ro operator for years to come,” said the company.

Last year ACL announced it had chosen Liverpool as the UK port of call for its forthcoming fleet of five G4 con-ro vessels. It extended its contract with Peel Ports, which operates the freight terminal at Liverpool, for ten years following a review of potential schedules, market potential and opportunities for the North Atlantic services. The ocean forwarder has been calling at Liverpool since 1969.

In response to that announcement Peel Ports said it would be making a £10m ($16.7m) investment at the port of Liverpool to create a dedicated vehicle storage area with a capacity to handle 70,000 vehicles a year, as well as widening the passage which gives access to the port’s Seaforth Dock for larger vessels.