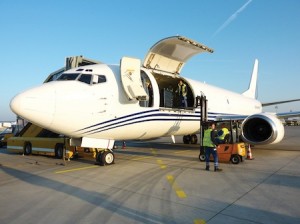 Aircraft charter provider, Air Charter Service, has reported a 22% year-on-year rise in the number of charter contracts its North American offices completed, and has partly attributed the rise to an increase in bookings from automotive customers.

“As the auto industry as a whole has begun to pick up, we have been busy arranging aircraft to transport production line parts and equipment across North America and indeed, worldwide,” commented Richard Thompson, ACS’s vice-president, North America.

According to ACS many charter airlines are experiencing financial difficulty, something Thompson said the company is benefiting from because of its financial stable: “We’ve seen several cases in the last year of companies turning to us after the airlines they dealt with directly went out of business, often taking their clients’ money with them,” he stated. “Before these experiences, many had not considered us as an option, but as a global, non-asset-based company we provide them financial security few else can.”

The company also reports that inter-continental automotive cargo shipments have increased: “We are arranging more and more contracts, flying to the US from South America, Europe and Asia,” said Thompson. “The majority of our automotive business is still for domestic movements, but as the industry recovers customers are turning to charters more frequently to support the rise in production.”