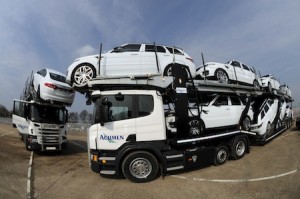 UK logistics provider Acumen Automotive Logistics has secured new contracts with Jaguar Land Rover for the transport of vehicles from the carmaker’s plants in the UK Midlands to dealers in the south of the UK, as well as for delivery to ports of export. The contracts will mean the annual movement of 100,000 vehicles.

The contracts will run for three years during which time Acumen said it expected to treble its turnover based on the carmaker’s current level of growth. The contracts have the potential to be extended for a further two years.

In support of the contract Acumen has invested £3.6m ($5m) in 20 new tractor and car carrying trailer units and has refurbished its existing fleet of 24 trailers.

“We have set out to be Jaguar Land Rover’s carrier of choice,” said Peter Raybould, business development director of Acumen Automotive Logistics. “We have supported the company’s growth strategy over the past three years and like to think that the awarded contracts are our reward for good service,” he said.

The logistics provider first won the contract to deliver Land Rover models to the south of the UK from its Gaydon plant in 2010.

On the inbound side, company’s Acumen Distribution subsidiary recently invested in a new warehouse management system (WMS) used at its facility in Halewood near Liverpool to supply inbound parts to JLR’s nearby plant.

This has been a strong start to the year for both brands thanks to continued global demand for our latest model offerings,” said Andy Goss, group sales operations director.

Sales in the China region have been particularly strong, up 36%, and led by Land Rover. More widely Asia Pacific saw a sales rise of 13%, as did North America.