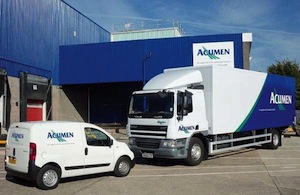 UK-based transport provider Acumen Distribution, a subsidiary of the Acumen Logistics Group, is investing in a new warehouse management system (WMS) used at its facility in Halewood, Liverpool.

The Optima system is being introduced to the 4,600-square-metre facility in preparation for increased parts flows from July 2014. The warehouse, which was opened in 2012 and currently employs 23 members of staff, is designed specifically to handle bulk inbound components for the automotive market.

Chris Doughty, Acumen’s Managing Director said the new system showed the company’s “total commitment to customers and the broadening of our warehousing and distribution services throughout the UK.”

Acumen, which also handles finished vehicles, and has been expanding its operations over the past three years.

The Optima software works on a modular system, which enables orders to be downloaded, stored in the right places and conditions, packed efficiently and eventually despatched. The system also facilitates import orders, tracks stock, records dispatches and produces reports for clients and end customers.

In terms of which companies are likely to make most use of the improved tracking devices, a spokesperson for Acumen told Automotive Logistics that it was most likely to be those supplying parts to the nearby Jaguar Land Rover plant.