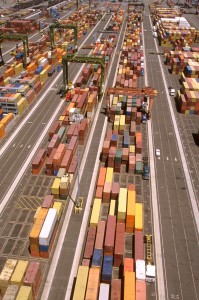 Disruption to container movements through ports up and down the US West Coast, which has affected production at a number of US automotive plants, looks to have been resolved following an agreement signed last week the Pacific Maritime Association (PMA) and the International Longshore and Warehouse Union (ILWU).

“After more than nine months of negotiations, we are pleased to have reached an agreement that is good for workers and for the industry,” said PMA president James McKenna and ILWU president Bob McEllrath in a joint statement. “We are also pleased that our ports can now resume full operations.”

The deal was reached with assistance from US Secretary of Labor Tom Perez and Federal Mediation and Conciliation Service deputy director Scot Beckenbaugh. In a statement the PMA and ILWU said they would not be releasing details of the agreement at this time.

Perez stated he thought the US economy could recover quickly from the dispute but acknowledged many have suffered losses and ports won’t be back to normal operations for several weeks due to the massive backlog.

The tentative five-year agreement, which still needs to be approved by the 13,000-member ILWU, brings to an end nine-months of negotiations concerning renewal of contracts for 20,000 port workers at 29 ports. It also promises to have ended months of congestion, which has slowed the throughput of cargo at ports between Seattle and San Diego to the detriment of a number of sectors, including automotive.

As reported last week, congestion at the port was affecting production at a number of plants in North America, including those run by Honda, Toyota and Subaru, and leading to the restrictions on output and resort to expedited air shipments.

A spokesperson for Toyota told Automotive Logistics this week that it is still too early to know the impact of the new agreement will be for sure.

“That said, we are pleased there has been an agreement reached,” said the spokesperson. “We will continue with reduced overtime in some plants until we have more clarity on the situation and look forward to operations normalizing.”

The restoration of normal operations is likely to take months according to industry insiders. The port of Oakland said it could take between 6-8 weeks for it and other West Coast ports to recover from the cargo backlog.

“Cargo movement should improve soon, but it will take time to restore full productivity,” said the port in a statement, adding that ships, containers and chassis are all out of balance. “They’re not where they need to be to support cargo movement. Repositioning of these assets will take some time.

Thirteen vessels were at berth at Oakland on Friday 20th, when the announcement of the agreement was made, and 16 were awaiting berths.

The ports of Tacoma and Seattle also welcomed the agreement but said in a joint statement that they were uncertain how long it will take to move the remaining cargo on their respective docks and that of awaiting vessels.

“We will do everything we can to support our customers in getting this gateway back to our high standards of reliability and efficiency,” said the ports in a statement.

The deal was also welcomed by the port of Long Beach’s chief executive, Jon Slangerup.

“We thank the ILWU and PMA and look forward to everyone getting back to business as usual starting immediately.

Slangerup also highlighted the challenges ahead. “We know that the marine terminal operators, longshore workers, truckers, railroads and others will be extremely busy as they work to clear out the massive backlog of cargo at all of the West Coast ports, including Long Beach,” he said.