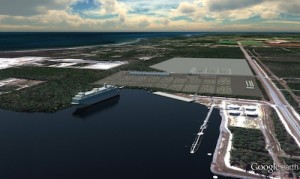 The director of the Alabama State Port Authority, Jimmy Lyons, has revealed plans for the development of a $54m finished vehicle terminal at the port of Mobile. The authority has secured the property already and is in talks with carmakers and vehicle processors. The initial project will see the development of a single berth facility with 40 hectares of land, with further plans for a second berth and an additional 80 hectares of land to be developed subject to demand.

The first stage of the development is expected to be complete in approximately three years.

“We are working on the financing of the project and so the plan is to start the construction process in between 12 and 24 months, with an approximate construction time of about 14 months,” Lyons told Automotive Logistics this week.

As well as exports from the carmakers with manufacturing locations in Alabama – mainly Mercedes-Benz as Honda, Hyundai and Toyota mainly cater for the domestic market – the development of a finished vehicle terminal at the port would provide another point of entry to the US for vehicles produced in Mexico and South America. Mexico was a big factor in the decision to build a vehicle terminal according to Lyons, who said the plan has been under consideration for some time.

The move is expected to provide competition for the nearby ports of Brunswick and Jacksonville, as well as the land border with Mexico.

The port of Mobile does not have currently support any vehicle shipments, mainly handling commodities and containers instead, but automotive production in Alabama is growing as are imports from Mexico.

Lyons said the port had been investing an average of $65m to $70m each year in expanding the port's capabilities. It has paid $300m in the development of container handling and is currently building a pure intermodal container facility that will provide a rail link for onward transport trailers and containers, served by CSX. Lyons added that the port will be developing that rail infrastructure with a view to supporting road haulage of vehicles with rail services.

In May this year the port authority acquired two industrial tracts adjacent to its Choctaw Point Complex at the port.

“Both of these properties are strategic to the port authority’s long range growth by providing expansion opportunities for the port’s intermodal investments,” said Lyons at the time.