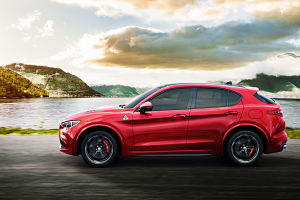 Italian carmaker Alfa Romeo expects to add 1,800 staff at its Cassino plant in Italy by 2018 as it gears up towards increased production of the Giulia model and Stelvio SUV.

Currently the plant, which is located about 100km from Naples and has produced over 7m vehicles since 1972, employs 4,300 people in two shifts.

The 1,800 extra staff will include new hires and a number of employees returning after the end of a temporary layoff scheme, according to a company spokesman.

The planned boost to the workforce was revealed in a speech at the plant last week by Alfredo Altavilla, chief operating officer for Europe, Middle East and Africa (EMEA) at Alfa Romeo brand owner, Fiat Chrysler Automobiles (FCA). The event was also attended by Italy’s prime minister, Matteo Renzi.

Altavilla’s speech also referred broadly to the topic of Industry 4.0 and how the company was embracing technology.

The Giulia-inspired Stelvio (pictured) is the Alfa Romeo brand’s first SUV and was revealed at the Los Angeles Auto Show earlier this month.

Altavilla said that to accommodate the new models, the company had to rework the plant and Cassino was now a “state-of-the-art” factory in terms of automation, logistics and the organisation of production.

The production line will be dedicated exclusively to these latest Alfa Romeo models, according to FCA comments at the launch of the Stelvio. The plant has also built Lancia's and Fiat brand models in the past.