Amports to develop vehicle terminal at port of Tampa 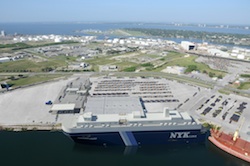 The Tampa Port Authority has announced the development of a new vehicle terminal at the port of Tampa, Florida in conjunction with Amports, one of the US’s largest auto-processors. The terminal is expected to attract imported vehicles moving by short-sea shipping from Mexico, as well as US-built exports to the Caribbean and Latin America.

Work on the terminal will begin immediately, with operations expected to begin by the start of 2014, according to Raul Alfonso, the Port Authority’s chief commercial officer  He said the Tampa terminal will have an initial capacity to service up to 100,000 cars annually, with the potential to increase according to the market.

Representatives from Amports and the Port Authority cited the “strategic position” of the new terminal in terms of its central location in Florida and local motorway access, as well as for faster shipping routes to Mexico and beyond. “Mexico’s fast growing automotive-manufacturing sector, and Florida’s growing population and tourism, presents a great opportunity for the port of Tampa to become a major gateway to this market,” Alfonso told Automotive Logistics. “The ability to use short-sea services via our port should generate considerable demand from most OEMs as an efficient alternative to their supply chains into Florida.”

Steven Rand, Amports president and CEO, also highlighted the port’s proximity to Mexico. “We believe that Tampa is right in the sweet spot for short-sea shipments out of Mexico. We also believe it will become a gateway port for exported finished vehicles,” he said.

The port of Tampa is currently used for a small volume of vehicle shipments, mainly used-car exports. According to the port authority, the port handled around 5,000 vehicles in 2012, of which 90% were exports, 10% imports; 25% of the vehicles were new and 75% used.

Tampa is Florida’s largest port, and its expansion has matched growing demand from the Mexican market. According to the Port Authority, the need for low-cost transport and distribution to the US makes Tampa’s state-central location a key hub of the automotive supply chain. It is one of the United States’ most cargo-diverse seaports, and currently supports around 80,000 jobs and generates $15.1 billion per year.

Should Tampa’s vehicle volumes match the expectations of the Port Authority and Amports, it would make the port one of the major automotive players in the region. The largest vehicle-handling port in Florida by far is Jacksonville – where Amports also has a terminal and is headquartered – having handled more than 546,000 new vehicles in 2012. The port of Brunswick in Georgia, some 100km north of Jacksonville, handled more than 603,000 new vehicles last year.

Both ports handle significant deep-sea volume, including import and exports to Asia and Europe, along with some flows with Latin America. However, it’s clear that the Tampa Port Authority and Amports see Tampa as an alternative to shipping out of Mexico, where a clutch of carmakers are building and expanding assembly plants that will export to the US. There have been concerns in the North American vehicle logistics sector that the railways would not be able to meet all of the rising demand for exports, making short-sea shipping between the US and Mexico poised to expand.

Alfonso estimated that, given the growth in Mexico, the new terminal would affect all those who have an interest in the automotive sector, including carmakers and shipping lines.

The alliance between Amports and the port authority is expected to boost the Tampa Bay region’s economy with new port-related and logistics jobs, although Alfonso said it was too early to estimate the precise extent of new employment created. The auto-processing facility will also create new jobs in the areas of auto-processing and mechanics, he said.

Amports currently operates nine terminals in both the United States and Mexico, and processes over 1m vehicles per year.