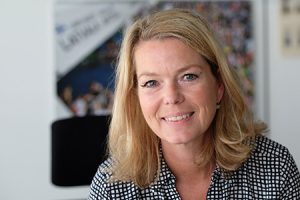 BLG Logistics has announced the appointment of Andrea Eck as director of its automobile division from January 1st next year.

Volkswagen has confirmed that Eck will be leaving it after more than three decades with the automobile manufacturer that began with her initial training as industrial management assistant at Volkswagen’s Kassel site.

Eck is currently responsible for the Logistics Campus at the Volkswagen Academy, and previously headed outbound and containers for what was then Volkswagen Logistics, the carmaker’s in-house logistics unit. Prior to vehicle logistics, Eck had plant-based logistics roles at Volkswagen’s plants in Portugal and later Emden, in Germany.

In an interview in late 2015, Eck highlighted the importance of having a highly motivated team. “It’s only possible to achieve the highest level of performance when everyone in the process chain is working together towards the same goal,” she said. “Knowing that the national and international competition is fierce, we have to deliver our best every day.”

Eck has only been in her current role since January, after Markus Lange replaced her as head of the group’s outbound logistics.

Dr Stephan-Andreas Kaulvers, chairman of the BLG supervisory board, said: “With all her experience in the automobile industry, Ms Eck is just the right person at this time to successfully tackle the present and future challenges in the automobile division.”

The BLG automobile division includes terminals throughout Europe at seaports, on major rivers and inland. It also owns its own fleet of trucks, barges and rail cars.