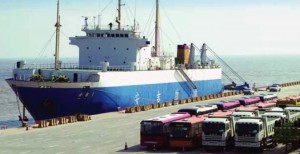 Anji Automotive Logistics has ordered a second pure car and truck carrier (PCTC) from Jinling Shipyard, part of the Sinotrans and CSC group, with delivery due in 2016. The vessel will have capacity for 2,000 car equivalent units and will join a growing fleet as the company meets demand for more Chinese car exports.

Anji Logistics, which had a turnover of RMB 14.7 billion ($2.35 billion) last year and is a subsidiary of SAIC Motor, still derives most of its revenue from road-based vehicle logistics, but around 20% of its business is now focused on maritime, a figure that is expected to grow to 30% by 2016.

Anji has a number of joint ventures at ports in China, including at Shanghai, Dalien and Guangzhou, amongst others, and is negotiating another at Nanjing. Investment in these and other similar projects so far has reached RMB 5 billion.

Along with its finished vehicle shipping, Anji is also looking at waterways for spare parts shipments, a sector that generated revenue for Anji Logistics of RMB 4.1 billion last year and has grown more than 30% over the last three years.