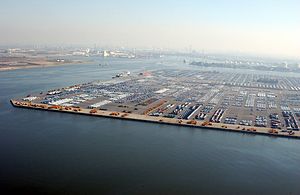 While the Belgian port of Antwerp has reported strong figures for container and liquid bulk traffic through 2014, the number of vehicles handled is down by almost 8% compared to the previous year.

A final figure on volumes moved through the port last year is expected to be around 1.2m, compared to the 1.3m handled in 2013. Those figures include second-hand vehicles, and it is loss in trade to this segment that has accounted for the main drop in vehicle handling, according to the port.

“The lower volume is due – among other things – to the Ebola outbreak in West Africa, the unrest in the Middle East and the poor economic situation in Argentina and Brazil, all of which are important markets for second-hand cars,” said the company in a statement.

Final figures for vehicle handling in 2014 are not yet available, said a spokesperson for the port, but in 2013 the company handled 760,000 new vehicles, leaving around 540,000 accounted for by second-hand vehicles. If new car volumes remained roughly steady in 2014 with the previous year’s figure, the drop to 1.2m suggests that Antwerp lost around 100,000 second-hand vehicles last year thanks to the above regional factors, though this is yet to be confirmed by the port.

Conventional break bulk was also down by 3.3% and is expected to total 9.75m tonnes for the year as a whole. However, the port said that despite this decrease, break bulk was still very important, not least in terms of employment in the port, accounting for some 40% of dock labour.

The number of standard containers handled in 2014 grew by 4.5% to 8.96m units. The port forecast that this put it in a good position to handle more than 9m containers next year.