ARC carrier forced back to Southampton port by fire 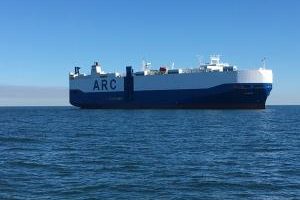 The ship had just left the UK’s port of Southampton when a fire was discovered in the cargo hold at around 04:00am CET. ARC reported that there was no injury to the crew and the vessel was able to return to the port of Southampton under its own power with the fire extinguished but it is not yet known to what extent the cargo has been affected (or what it was carrying).

The vessel anchored at Southampton on Monday morning (February 27th) but an assessment of the impact of the fire will not be made until the end of this week, according to a statement by ARC. The CO2 system on board the vessel was used to put out the fire meaning the hold will have to be ventilated first.

In a statement ARC said that inspections of cargo on the unaffected decks (decks 4-12) will begin on Friday morning, March 3 and any possible cargo damage on the affected decks (1-3) would not be assessed until the authorities complete their investigation.

“In consultation with the appropriate authorities, a ventilation plan is being developed for approval and implementation,” said the company last week. “Any possible cargo damage or vessel damage will not be assessed until the authorities grant permission to access the impacted spaces. Permission is not expected to be granted until the middle of the week, at the earliest.”

A spokesperson for Associated British Ports (ABP), which operates the port of Southampton, said it had worked with Hampshire Fire Brigade and the Marine and Coastguard Agency to ensure the safe delivery of M/V Honor back into the port with no disruption to port operations.

“Southampton harbour master Martin Phipps has coordinated the port’s response to the incident and we are now working with our customers to minimise disruption to their businesses,” she said.

ARC is the largest US-flagged ro-ro carrier, and the third largest US-flag carrier operating in international trade. Along with the port of Southampton, its European service takes in the Belgian port of Antwerp and Bremerhaven in Germany, also calling at the US ports of Baltimore, Charleston, Brunswick and Galveston.

It is not the first time a fire damaged ARC vessel has called at Southampton port. Back in 2015 the M/V Courage, one of ARC’s pure car and truck carriers (PCTCs), arrived at the port following a fire in the cargo decks, with damage reported to 100 vehicles on board.