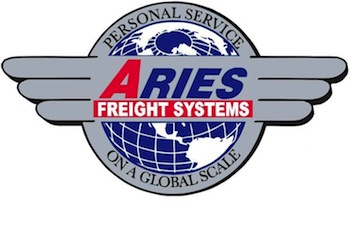 Aries Freight Systems, which provides contract logistics and distribution services for the automotive industry, will officially open a new warehouse and distribution centre at the border with Mexico in Brownsville, Texas on October 16th. The centre, which become operational earlier this year, handles freight moving between Mexico and the US in a Free Trade Zone, also known as 'maquilas'.

The facility will serve a range of suppliers to automotive customers, including BMW, Ford, Freightliner, GM and Mercedes Benz amongst others.

Aries Freight deals primarily in trucking, and has experienced recent growth in the maquila business. Aries is certified by Customs Trade and Partnership Against Terrorism (CTPAT), meaning trucks are sealed at departure points to allow for streamlined inspections and thus faster border crossings. Mexico currently has the highest amount of freight theft in the world.

In a quote made to the Brownsville Herald, mother-and-son team Emanuel Velasco, district manager, and regional account manager Annalicia Velasco discussed their motivations behind the move. Emanuel stated that the port of Brownsville was a major deciding factor, as well as the fact that the area is known for its high imports and exports of steel and other commodities.

“We decided that business is growing in Brownsville and this is where we need to be,” said Annalicia Velasco.

“We were the ones that kind of pushed it,” Emanuel Velasco said. “We were paying about $350 per trailer to go from Matamoros to McAllen. Once you add that up, two or three trailers a day, it gets pretty expensive.”

As was witnessed at the Automotive Logistics Global conference in Detroit last month, Aries Freight is one of a number of logistics providers benefiting from the so-called ‘Mexican wave’(read more here) of automotive manufacturing growth in Mexico.

Mexico's GDP is expected to grow 3.4% in 2013 with factory exports making up 25% of the economy. Bilateral trade, which rose to 62% between 2009 and 2012, is expected to double that in next five years, according to the Mexican government.

Sixty percent of materials are moved by truck today, down from 70% in 2009, and rail is the mode taking the majority of the remaining 40%. Rail providers are spending $2.5m a month on security. There are currently more than 800 manufacturing suppliers with a presence in Mexico.