Arkas signs deal with Duisport for logistics services in Turkey

[Updated 26 November] Turkish logistics provider Arkas Holding has signed a joint venture agreement worth $120m with Germany’s Duisport to develop multimodal logistics facilities in Turkey and multimodal services between there and the Central Europe. 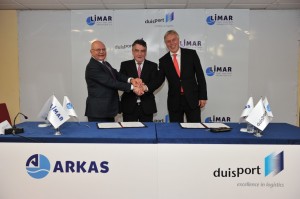 The announcement of the venture, the name of which is still being finalised, was made at last week’s Logitrans trade fair in Turkey.

“The bridge between Duisburg and Turkey highlights the importance that duisport’s logistic activities have in our globalized world,” said Michael Groschek, minister of transport for North Rhine-Westphalia. “The new, efficient connection between Istanbul and Duisburg paves the way for a wide variety of development and growth opportunities for shippers in North Rhine-Westphalia.”

One of the first projects the joint venture will embark on is the development and operation of a 200,000 sq.m+ multimodal logistics facility near Istanbul.

“In the wider area of the newly planned multimodal logistics facility there are already a number of automotive producers,” confirmed the spokesperson for Duisport. “Even though the facility will be open to any industry sector, the automotive industry will certainly be one of the main ones to be targeted as it represents one of the major economic drivers, in particular with regard to the exchange of goods between Turkey and Central Europe.”

This site of the facility is in the vicinity of Gebze industrial district and plans include the construction of a bimodal terminal and the marketing of the premises to production and logistics companies, including those in the automotive industry. Construction will start in 2016 and the total investment is said to be in “the high double-digit million range”.

The facility’s closeness to Istanbul means it will be integrated into the multimodal networks of both partners. Duisport said it already offers 15 weekly train connections to different Turkish destinations. This includes those using Marmaray tunnel in Istanbul, which will provide a direct connection to the new logistics area. The tunnel, which runs under the Bosphorus Strait in Turkey, opened in late 2013 after years of delay. Duisport and Arkas said this would create a Gateway Terminal for Istanbul and the entire region.

The tunnel is part of the wider Marmaray Project, a €1.91 billion ($3.07 billion) investment that connects rail lines from Europe to Asia, as part of a plan to establish an intercontinental high speed rail (HSR) network by 2021.

"Turkey is one of the main growth markets for the industrial and logistics value chain,” said Erich Staake, CEO of Duisburger Hafen. “With the Arkas Group, we have gained a strong and multinational partner that ideally complements our own network. By bundling our know-how, we are able to realise significant added value potentials in the region and further optimise the transportation chains of our customers."

In a joint statement Arkas and Duisport said that the links between the two hubs in Istanbul and North Rhine-Westphalia would offer customers an extensive and reliable intermodal network that extended from Central Europe to Asia and North Africa.

Marketing and sales activities for the joint venture will start at the beginning of next year.