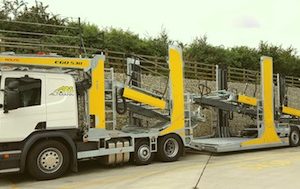 German finished vehicle logistics provider ARS Altmann will begin road-based deliveries in the UK in August, following the delivery of its first 20 car transporters this month. The move follows the company’s establishment of a subsidiary in the UK last year.

The first 20 transporters are made up of trailers provided by Rolfo capable of carrying 11 vehicles, which will be pulled by tractor units from Scania. ARS Altmann did not reveal the investment it had made in the units but has previously said it plans to double that number this year.

“We are delighted to introduce these new vehicles to the UK subsidiary and we are very excited about starting our operations in early August,” said Howard Nash, managing director of ARS Altmann UK. “The company has significant plans for the UK in a number of activities and this initial investment shows our enthusiasm to become one of the key providers in the UK.”

Rolfo’s Ego 538 trailer is the product of a joint venture with Belle Trailers and is currently claimed to be the only 11-car carrier that complies with UK height and weight regulations.