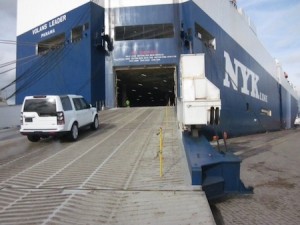 Figures released at this week’s International Automotive Summit held by the Society of Motor Manufacturers and Traders show that total UK passenger vehicle export values amounted to £24.8 billion ($41.6 billion) last year, double what they were in 2004 as the industry moved further towards building premium vehicles. For some manufacturers, notably Jaguar Land Rover, the rise in exports and value has also increased outbound logistics costs and the need for more frequent shipping services.

Just more than 77% of cars built in the UK are now exported, half of which are destined for the rest of the European Union but there is also now greater diversity in export markets outside of that region, led by China (10%), Russia (9.5%) and the US (9.2%)

“Countries around the world are spending twice what they were 10 years ago on UK-built cars,” said Mike Hawes, SMMT chief executive. The average wholesale value of each exported vehicle has also doubled over the last decade to £20,640.

In 2013 premium and specialist brands accounted for more than 42% of exports as well accounting for 60% of the model count produced in the UK last year. By 2017 UK-based carmakers are expected to hit annual production of 2m, an all-time record. The current, of 1.92m, was achieved in 1972.

As exports have increased so has the amount carmakers have spent on outbound transport and logistics services. At JLR, for example, outbound services for markets such as China have become significant in terms of purchasing.

The company has been in talks with deep-sea operators about running dedicated services during certain times of the year, according to Ian Hartnett, director of purchasing at JLR and keynote speaker at this week’s SMMT event.

“I think it was two years ago that for the first time ever we chartered our own ship to go to China, which was supposed to hit just at the peak Chinese selling time around the new year,” Hartnett recounted. “We had a whole ship just for Jaguar Land Rover, which was quite scary because there was an awful lot of money on that ship and we could not afford to lose it.”

The company now appears to be looking to repeat this type of chartering given the rise in export figures, but there are considerations to weigh when it comes to finding the right routes.

“About six years ago we would have been exporting something like 6,000 cars to China and now it is probably a 100,000,” said Hartnett. “So the frequency in where you send the cars and from which docks, and which lines go to the right ports in Shanghai or Tianjin, [determines] the lines that go with it.

Hartnett acknowledged that more generally the carmaker could not influence a more regular service specific to its own needs given the export numbers it has compared to the wider volume brand market, but he said that JLR was maximising the benefit by getting on the right lines with the right frequency.

For example, he said that the company was shipping vehicles from the UK ports of Southampton and Tilbury on a daily basis.

JLR is building a factory in Changshu, outside Shanghai, with joint venture partner Chery, which is scheduled to launch later this year.