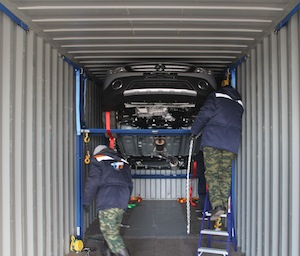 Russian finished vehicle transport provider, ATK, reports that it has cut delivery times on imports from China by more than half, by shipping them by rail in containers.

“In 2015, we transported four container trains stacked with 800 vehicles from Wuhan to Moscow,” ATK’s spokesperson, Sergey Kuvshinov said. “Containerisation gives us the option of utilising overland rail routes and takes only 23 days, dramatically reducing the transit time via sea passage through St Petersburg by more than half. Another key advantage of course was that there has been zero damage to the vehicles.”

The vehicles, which were from Dongfeng Motors, were loaded into the containers using an internal cassette system provided by Trans-Rak International – the R-Rak in this case – to optimise the loading process and secure the vehicles in transit. It is a method that ATK is looking to build on this year, with further purchases of Trans-Rak’s equipment on the cards in 2016.

“Vehicle racking is making all the difference to logistics firms looking to maximise their services in emerging markets,” said Trans-Rak’s managing director, Paul Donaldson. “More and more logistics providers are recognising the advantage of significantly shorter shipping times on the Sino-Russian route, as well as benefiting from reduced freight costs with zero damages.”

The options for finished vehicle rail shipments between China and Europe, and China and Russia, are growing, at least for medium level volumes. In terms of security and quality, containerisation of those vehicles over such a vast terrain is important. In terms of speed of delivery, 23 days is around half the time for ocean ro-ro shipments via Shanghai (and 15 days for destinations in the west of China from Europe).

“ATK wanted to reduce the transit time and it was key for them to be able to get it there within 23 days, rather than 45 days,” said Donaldson.

Trans-Rak is already providing its solution to a number of carmakers shipping in and out of China, including BMW, from Duisburg in Germany to Chongqing, now China’s biggest freight terminal. Trans-Rak will begin supplying the internal racking systems it offers for delivery of 6- and 7-Series vehicles later this month.

“BMW have stated there is less damage in moving cars in containers than there is when using trains or ro-ro,” said Donaldson. “That came from them a few weeks ago on some of the projects into South America.”

Donaldson went on to say that Trans-Rak had seen a rise in orders from China for the R-Raks, as shippers looked for ways to cope with an increase in demand for the containerised rail service.

As reported last year, one Chinese logistics provider that has embraced Trans-Rak’s equipment is Swift Transport International Logistics. The company moves new vehicles by rail in 40ft containers (FEUs) from China to Russia for Dongfeng’s joint venture with Peugeot Citroën (DPCA), along with containerised shipments from Tianjin and Shenyang for Great Wall, and with the Wuhan route for Dongfeng.