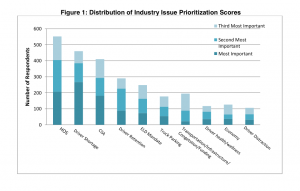 The American Transportation Research Institute (ATRI) has revealed a list of the top ten critical issues facing the North American trucking industry, with the controversial hours-of-service rules for drivers at the top and still a major concern for the industry.

ATRI has surveyed more than 4,000 trucking industry stakeholders for the latest annual survey and the results were released at the 2014 Management Conference and Exhibition of the American Trucking Associations (ATA) meeting, held this week in San Diego, California.

The second biggest concern was the growing driver shortage in the industry, a well-documented concern for this magazine and one that was once again raised at the recent Automotive Logistics Global conference in Detroit.

The American Trucking Association has said it is 30,000 short on drivers across the industry. Up to 20% of drivers are now between 55 and 65, while only 8% are under 30 years of age. Given the number of years it takes to become proficient as a car hauler, for example, this is of particular concern as volume movements climb toward 20m in the next decade.

Another well-documented concern is the Federal Motor Carrier Safety Administration (FMCSA) Compliance, Safety, Accountability (CSA) programme which ranked third overall on the 2014 list.  The programme replaced the previous SafeStat system and includes several measures to reduce commercial vehicle crashes. It cut the amount of hours that a driver can work and introduced a driver safety assessment tool that includes a two-year history of performance to help enforcement staff evaluate drivers’ safety records.

Related to the driver shortage, driver retention moved to fourth place from seventh in 2013 as trucking fleets work to retain their most experienced and qualified drivers.

Finally, industry concern over the timing and specifics of the pending FMCSA Final Rule on electronic logging devices (ELDs) caused this issue to round out the top five industry issues of 2014.

The state of the nation’s economy, which first appeared on the top industry list in 2008 and held the number one spot for three years in a row (2009-2011), dropped to number nine on this year’s list.  The 2014 list also has a first-time issue, Driver Distraction, which debuted in 10th place amid industry concern over the safety impacts of car driver use of cell phones while driving.

"As we all know, the trucking industry constantly faces changes and challenges to how we operate safely and efficiently,” said ATA president and CEO Bill Graves. “However, our industry has always responded to these issues with determination and ATRI’s work gives us the information to decide where to focus our energies first and foremost.”