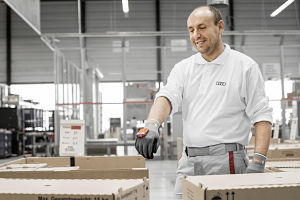 Audi has adopted a wearable scanner from ProGlove at its Ingolstadt plant in Germany in what it describes as the first step towards the widespread use of wearable technologies in its production process.

Audi tested the handheld scanner replacement – which leaves both hands free for other handling operations unlike conventional scanning technology – over four weeks before deploying the first gloves at selected workplaces in the complete knockdown (CKD) logistics facility. The ProGlove is now also being piloted in other areas of production.

The Mark glove (pictured) has an ergonomically optimised trigger button on the index finger, which operates the embedded scanner when it is pressed against the thumb.

“We plan to roll out usage of the gloves successively further to several other workplaces and even different plants, though the exact application possibilities have [yet] to be defined,” an Audi spokesperson told Automotive Logistics.

ProGlove is a Munich-based startup founded two years ago, after its inventors took third place and $100,000 of funding in the Intel ‘Make It Wearable’ global challenge.

“Basically we won our seed funding, and so over the past few years worked on the product and did a lot of pilot projects,” Thomas Kirchner, one of the founders, told Automotive Logistics.

By May, the company had refined the product, raising a further $2m from Intel to produce the Mark.

“Half of our customers are in automotive, so we are talking to the OEMs and the big suppliers,” said Kirchner.

The company’s next product, the Katharina, will also incorporate a smart watch display, he said.

Kirchner said the product had been piloted with most of the major German carmakers as it was developed. In August it was reported that Škoda workers at the carmaker’s Mladá Boleslav plant in the Czech Republic had also begun trialling the ProGlove.

Meanwhile Audi continues to test other wearable devices at its various plants.

“We feel it is very important to support our employees in their day-to-day work, which in some cases is becoming increasingly complex. This can include, for example, improving ergonomics, reducing the time they need to move between points in the workplace, and speeding up and simplifying processes,” said the Audi spokesperson.

At its engine plant in Györ, Hungary, the company has been testing Google Glass eyewear in the assembly of original parts, while the so-called ‘chairless chair’ – an exoskeleton that allows the wearer to sit anywhere – is being used at the assembly plants in Ingolstadt and Neckarsulm.

Wearable technologies also form part of the company’s smart factory initiatives. Also among these is the use of big data for more flexible and efficient manufacturing, as well as a disruptive manufacturing concept of modular assembly as an alternative to the traditional production line. 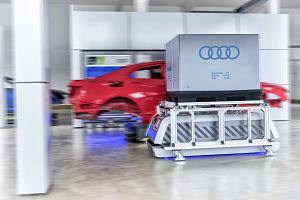 At the company’s recent TechDay Smart Factory event in Ingolstadt, Hubert Waltl, the board member heading production and logistics, said: “We are digitally merging fragmented processes and thinking beyond the assembly line of today. Artificial intelligence marks the birth of an exciting new world of work in the factory. Our employees are at the heart of intensive human-robot cooperation.”

Carmakers including BMW and Volkswagen have also recently showed off their technology progress and initiatives for future use in production and logistics.