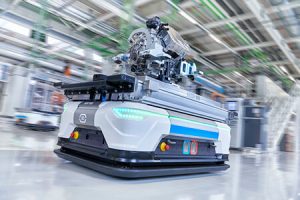 The first electric motors at Audi’s plant in Györ, Hungary, went into production this week and will be shipped to Belgium for fitment on the Audi e-tron, the carmaker’s first all‑electric model, which is being made at its assembly facility near Brussels.

Current production capacity is approximately 400 electric axle motors each day, which can be gradually increased, according to the company.

Audi is planning to begin production of the e-tron at the Brussels plant later this year and to bring it to market in 2019 to challenge the Jaguar I-Pace and Tesla’s Model X.

Employees are making the drive systems on modular production islands rather than an assembly line. Similarly, the robots, and the bolting and measuring stations, are set out in fixed positions but are not linked together. Audi said the plant did have a predefined assembly sequence but that the modular system allowed more free scope in the production process along a network of branched paths. Driverless vehicles, controlled by an intelligent IT system, transport the parts to the workstations.

This intelligent navigation software and the AGVs being driven by it have been developed with equipment specialists in-house by Audi's Technical Centre for Production Assistance.

“Our Hungarian subsidiary is now entering a completely new field of expertise with the production of electric motors,” said Peter Kössler, board of management member for production and logistics at Audi. “This exclusive know‑how makes Győr into our main plant for electric motors and embodies our strategic transformation into a provider of sustainable mobility.”

As revealed by Automotive Logistics earlier this year, Audi has developed two types of AGV. One uses a laser tracking system, which can recognise and guide a group of driverless transport vehicles, similar to the way truck platooning works. A central computer on a mobile unit locates the other transporters by means of their reflectors using a laser scanner, and then gives them transport commands by radio to create an autonomous tugger train.

The second type of AGV uses intelligent navigation software based on that used for autonomous driving. The AGVs can thus supply goods from the warehouses to the assembly line freely and autonomously, recognising and reacting to traffic situations. They do not require magnetic strips as older generations of AGVs have.

Audi said the departments involved in the development of the electric motors and those in production planning cooperated closely with the prototype manufacturing/production technology centre in Győr to develop the required expertise. It has also said that the number of people employed in making the new motors will rise from about 100 now to over 130 by the end of the year. Production is a one‑shift operation for now but will soon change to three shifts, added the carmaker.

Automotive Logistics will hold its first Central and Eastern Europe summit in Budapest, Hungary, on November 13-14 this year