Audi tests exoskeleton for workers in logistics and production 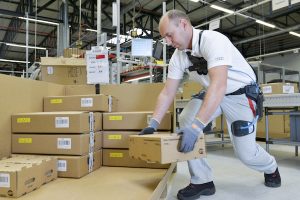 Audi is trialling an exoskeleton device for workers at its German plants in Ingolstadt and Neckarsulm that is designed to provide support for lifting and carrying heavy material.

Employees are testing the device, developed with specialist Dutch manufacturer Laevo, at logistics, press shop and assembly workstations at the plants.

Audi said the device provided ergonomic support in a number of ways, including assisting workers taking parts out of crates in complete-knockdown (CKD) assembly, when they were carrying heavy material boxes, and in the installation of the central console into vehicles. Usage has been gradually increased from two to seven hours during the day shifts at the plants.

The lifting aid is worn on the body and weighs approximately 3kg. It consists of a metal frame with elements on the upper body, lower back and thighs. Audi said wearing the exoskeleton reduced strain on the back by 20-30% and promoted a healthy posture.

“Ergonomic working practices have high priority in all areas at Audi – including production and logistics, of course. With the exoskeleton – or the ‘ergoskeleton’ as we also call it at Audi – we promote healthy working conditions, avoid excessive strain and maintain our employees’ performance,” said logistics planner and head of the ergoskeleton project, Vinzent Rudtsch.

Audi said the pilot project was being supported by an interdisciplinary team of process and workplace planners, and also medical experts. The tests are being carried out in collaboration with Laevo and the goal after the test phase is to integrate the device gradually into series production at all Audi plants worldwide.

The new device is the latest in a number of ergonomic supports the carmaker has introduced into its production and logistics, including the ‘chairless chair’ – a so-called passive exoskeleton device developed with Swiss start-up noonee that is fitted to the back of the legs and improves a person’s posture while carrying out assembly line work.

Another example is the specially designed glove Audi developed with orthopaedic medical supplier Spörer, which reduces hand stress for workers fitting out door trims on the assembly line.