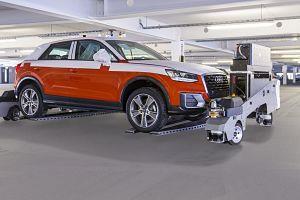 The German Association of the Automotive Industry (VDA) has awarded Audi with the annual Logistics Award for 2017.

The award was made in recognition of the German carmaker’s driverless vehicle transport system. More specifically a parking robot, nicknamed ‘Ray’, is able to sort up to 2,000 finished vehicles per day for loading onto railway freight cars.

Audi claims it is currently the only application of its kind in the automotive industry. The idea for the robots came from the Bavarian company Serva Transport Systems.

Currently, twelve of the robots, each measuring six metres long and three metres wide, are in use at the Audi factory in Ingolstadt. This number has grown from just two units in operation during 2015.

Using lasers they gauge the position and dimension of a car before adjusting to lift it off the ground by about 10cm and then move it. A central control system allocates a space for the robot to park the car. Even the process to replace the batteries on the robots is automated.

Speaking at the Association of European Vehicle Logistics (ECG) event in 2015, Claudius Illgen, head of vehicle shipments Ingolstadt explained the benefits the system to employees: “We want to reduce walking distances significantly. Employees currently walk about 8km per shift in the outbound tower, which we want to bring to zero.”

Overall the driverless transport systems can handle up to 8,000 vehicle movements per day and covers a combined distance of about 500km.

Speaking on the back of the award announcement, Hubert Waltl, Audi’s head of production and logistics said: “Driverless transport systems are one of the key technologies of the smart factory.” He also said the technology would be transferred to other processes and sites within the company.

Audi has also previously reported using driverless transport systems (DTS) to deliver goods to employees at Ingolstadt. The DTS move the goods autonomously by driving under the shelves, lifting them up and transporting them to a central picking station. Once at the picking station, symbols on a monitor show the employees which goods they need to put into which place.

In another technological advancement, wearable scanners from ProGlove were adopted at the facility last year.